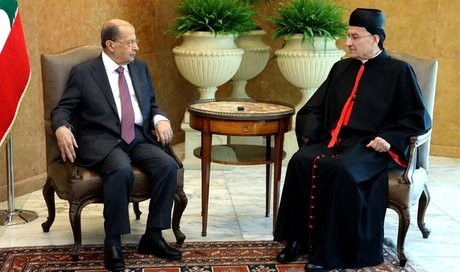 Maronite Patriarch Beshara al-Rahi stressed on Friday that President Michel Aoun is the “guardian of the Constitution,” and described his stances during a heated Cabinet meeting on Thursday as “honorable.”

“The Constitution is clear and Article 49 is also clear and the President has sworn an oath to uphold the Constitution, the sovereignty of the nation, the unity of the people and the affairs of the state. He does not infringe upon anyone, the country would collapse in the absence of the president," said Rahi.

Aoun on Thursday ended the Cabinet's first session after a heated debate erupted over the thorny issue of relations with Syria.

“I know what Lebanon’s higher interest is, I am at the center of responsibility and these are my jurisdictions because I am the only one who made an oath to preserve the Constitution, the laws and people’s safety,” Aoun said.

Political camps in Lebanon are divided over normalizing ties with Syria to return the refugees to their homeland.

Prime Minister Saad Hariri and his political camp has expressed reservations over the issue.

Al-Mustaqbal Movement MP Mohammed Hajjar said in a tweet defending the jurisdictions of Hariri after Aoun’s remarks: “It may be useful to recall Article 64, as amended by the Constitutional Law as of 21 September 1990: The Prime Minister represents and speaks on behalf of the government and is responsible for implementing the general policy set by the Council of Ministers.”

The bible is clear give to Caesar what is Caesar's and give to the lord what is the lord's. In other words all so called religious leaders need to stay out of politics...

Best Maronite FPM Patriarch-President combo with chili sauce and corn on the cob, ever!

What kind of christian leader talks like that? Christianity is all about loving people, helping people, turning the other cheek, forgiving people etc yet this guy sees humans as burdens. Did he forget that maronites came to Lebanon as refugees fleeing the orthodox sect in Syria? Jesus did not teach egoistic behaviour, selfishness nor nationalism and racism. He taught the kingdom of God, not the kingdom of the dysfunctional state of Lebanon. With leaders as Rahi, it does not surprise me at all how openly racist many maronites. They even act arrogant while wearing a cross around their neck. It's all hypocrisy in the name of Jesus.