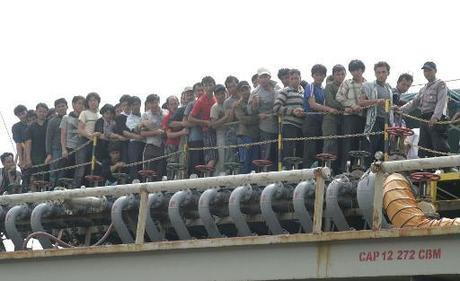 The U.N.'s human rights office said it had direct information that "at least 21 migrants awaiting deportation had been deprived of food by the Hungarian authorities -- some for up to five days," since August 2018.

The High Commissioner for Human Rights, Michelle Bachelet, had last September accused Hungary of withholding food from migrants being held in transit zones along its border with Serbia.

The U.N. rights office pointed out that the Hungarian authorities had promised to end the practice following an interim ruling by the European Court of Human Rights.

"However, we regret that, in the absence of a clear change in the legal framework, reports suggest the practice is continuing," spokeswoman Ravina Shamdasani said.

She said that once an asylum application had been denied, all adult migrants, with the exception of pregnant and nursing women, "are deliberately deprived of food."

This, she pointed out, "can lead to malnutrition and is both detrimental to their health and inherently inhumane."

The Hungary government stressed in an official blog post earlier this week that "asylum seekers who have requested asylum and whose claim is under review continue to receive food and shelter as they always have."

But it acknowledged that "we take the position that Hungary is not responsible for those who have not requested asylum, nor for those whose requests have been denied."

It maintained that rejected asylum seekers were not detained and were free to leave and cross into Serbia.

The U.N. rights office rejected the Hungarian assertion that migrants can simply travel to Serbia to have their needs met.

"We note that such 'voluntary' departure could put migrants at further risk as it could breach Hungarian deportation orders, and force migrants to enter Serbia irregularly in contravention of Serbian law," it said.

In general, it insisted, "migrants must not be subject to detention in inadequate conditions, arbitrary detention or other forms of coercion as this renders any return involuntary."

The rights office pointed out that the deliberate deprivation of food is prohibited under international law.

It stressed that countries have "an obligation and heightened duty of care towards migrants who are deprived of their liberty, including through the provision of food."

"We encourage Hungary to ensure it fulfils its human rights obligations towards those deprived of liberty, regardless of whether they are in transit zones or any other place where migrants are detained and cannot provide for themselves," it said.