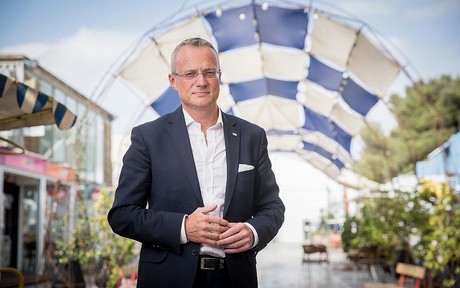 A 65-year-old Israeli man has been arrested for allegedly spitting at the Polish ambassador, police said Wednesday, adding to tensions between the two countries.

Polish ambassador Marek Magierowski was sitting in his car on Tuesday when a man approached and "spat at him", police spokesman Micky Rosenfeld said.

Police arrested a 65-year-old from Herzliya, a city north of Tel Aviv, on Tuesday, Rosenfeld said.

The suspect appeared before the Tel Aviv magistrates' court on Wednesday, where he was ordered to remain under house arrest for another day, Rosenfeld said.

He was also banned from approaching the Polish embassy in Tel Aviv for 30 days.

The alleged incident came a day after Poland cancelled a visit by Israeli officials over their intention to raise the issue of the restitution of Jewish properties seized during the Holocaust, a matter Warsaw insists is closed.

"Violence against diplomats or any other citizens should never be tolerated," Morawiecki tweeted on Wednesday.

Israeli foreign ministry spokesman Emmanuel Nahshon expressed "our fullest sympathy to the ambassador and our shock at the attack."

According to Israel's Yediot Aharonot daily, Magierowski was also verbally accosted by the suspect in Hebrew, but did not understand anything except for the word "Pole" directed at him.

Last year, Warsaw passed a law that made it illegal to accuse the Polish nation or state of complicity in Nazi German war crimes.

The move sparked an outcry from Israel, which saw it as an attempt to ban testimonials on Polish crimes against Jews.

In response, Warsaw amended the law to remove the possibility of fines or a prison sentence.

In April, the World Jewish Congress condemned a Polish town after reports that residents burnt an effigy "made to look like a stereotypical Jew" in a revival of an old Easter tradition.