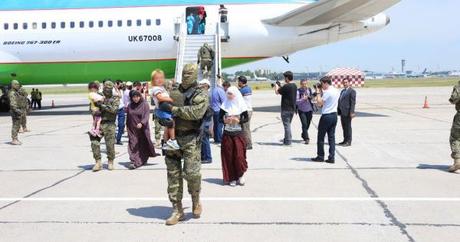 Uzbekistan on Thursday said it had repatriated 156 citizens, mostly women and children, caught up in unspecified Middle East armed conflicts, a day after Kurdish authorities in Syria said they had handed over scores of Uzbeks linked to IS.

The Uzbekistan foreign ministry said the citizens had been "tricked into the zone of armed conflicts in the Middle East" but made no reference to the country from which the citizens were returning.

Their arrival in the capital Tashkent "by special flight" was ordered by President Shavkat Mirziyoyev, the statement said.

The Uzbek authorities offered few details of the repatriation but said the government would "provide comprehensive assistance to rehabilitation and reintegration for all Uzbek citizens who have returned to their homeland after a difficult life".

The announcement came after Kurdish authorities in northeast Syria on Wednesday handed over 148 Uzbek women and children linked to the Islamic State group to diplomats from the Central Asian country for repatriation.

In total more than 300 Uzbeks were due to be sent home, spokesman Kamal Akef told AFP, as the Kurds look to transfer away thousands of foreign jihadists trapped in camps following the defeat of the IS "caliphate" by U.S.-backed forces.

The fall of the Islamic State's caliphate in Iraq and Syria has left many countries grappling with what to do with the jihadists and their relatives.

Many of their countries of origin have been reluctant to repatriate them or put them on trial at home.

The largest repatriation effort by a European country so far saw Kosovo in April take back 110 of its nationals from Syria -- mostly the wives and children of IS fighters.

Earlier this year hundreds of people were repatriated to neighboring Kazakhstan from Syria and some were detained for extremism on arrival.

Another Central Asian country, Tajikistan, said this month that 84 children had been brought back from Iraq, where their parents had been either sentenced to prison for extremism-related crimes or killed in battle.

More than 370,000 people have been killed and half of Syria's population displaced since the war began in March 2011.