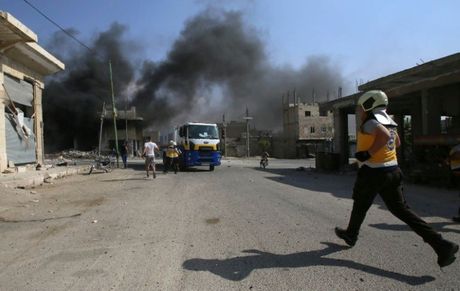 Three children were among the nine killed outside Maaret al-Numan, a town located in a southern strip of Idlib province, said the Syrian Observatory for Human Rights.

The death toll is expected to rise due to critical wounds sustained by some other victims, according to the Britain-based monitoring group.

Russian and Syrian regime aircraft have ramped up strikes on Idlib since late April, killing more than 600 civilians, while 52 others have died from rebel fire, according to the Observatory.

Regime forces have also been locked in battle with jihadists and allied rebels on the edges of the bastion, which is held by Syria's former Al-Qaeda affiliate Hayat Tahrir al-Sham, including the north of Hama province.

The group in January took full administrative control of the Idlib region, home to three million people, although other jihadist groups and rebel factions are also present.

Idlib and its surrounding areas are supposed to be protected from a massive regime offensive by a September 2018 deal between Russia and rebel backer Turkey.

A buffer zone planned under that accord was never fully implemented, and the region has seen an uptick in violence.

Syria's war has killed a total of more than 370,000 people and displaced millions since it started in 2011 with a brutal crackdown on anti-government protests.