Palestinian Protests Continue for the Second Day in Ain el-Hilweh 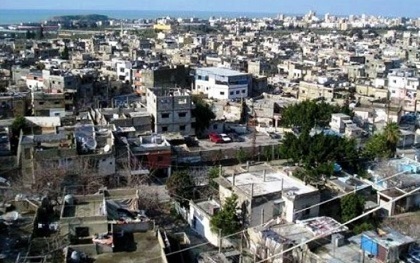 Palestinian refugees continue their protest for a second day in a row in the Sidon refugee camp of Ain el-Hilweh by closing the entrances into the camp and imposing a ban on entry of food protesting against Lebanon's labour ministry cracking down on businesses employing foreign workers without a permit.

The National News Agency said the move continued overnight in Sidon as cars roamed the streets of the city in a show of solidarity with Palestinians, as a number of youth blocked some roads with burning tires.

The Lebanese army immediately deployed and worked to reopen the road and disperse the protesters.

On Tuesday a couple of hundred Palestinian refugees protested in the streets of Beirut, as well as in the south and east of the country, and denounced the move as "unfair".

In Beirut, security forces prevented the protesters from reaching parliament, where this year's much delayed state budget was under discussion.

Palestinians in Lebanon are exempt from paying for work permits, the UN refugee agency says.

But Palestinian business owners must still register and pay a quarter of the standard fee.

"Of the 550 violations registered since last Wednesday, only two concerned large companies owned by Palestinians," he said.

"The Palestinian reaction is incomprehensible," the minister said.

The Palestinian ambassador in Beirut, Ashraf Dabbour, on Monday called on the Lebanese government to exempt Palestinians from these measures.

Palestinian movement Hamas called for "the immediate end to all closures".

Azzam al-Ahmad, from the Palestine Liberation Organisation, discussed the measures with Lebanese officials, saying they went against Lebanese-Palestinian efforts "to organise the residency, work and rights of Palestinian refugees in Lebanon".

Around 174,000 Palestinian refugees live in 12 camps across the country, a one-off government census said in 2017.

In 2010, Lebanon's parliament revoked a ban that had barred them from tens of professions for years, restricting them to jobs in fields such as construction and farming.

But Palestinians are still not permitted to work in professions reserved for Lebanese citizens such as medicine, law, the army, and police.

Their presence has been controversial, with many blaming them for the start of Lebanon's 1975-1990 civil war.

Lebanon says it hosts around 1.5 million Syrians, after they fled the eight-year conflict at home, who have been accused of sparking a series of economic woes in the country.

Excuse me, but do you think that it would be sensible for the Republic of Lebanon to have in its armed forces and police people who are not citizens of the country, people who for 70+ years have fought against the authority of the government from within. I, for one, wouldn't trust their loyalty to the state.

s.o.s. There are no such things as"palos" as you call them. There are 1.2 milion Arabs both Moslem and Christian who have full Israeli citizenship, and there are Palestinians who have permits to work in Israel.
As far as the Israeli Arabs are concerned they can volunteer for service in the army, they are not forced to serve, and of course can offer to serve in the police force and other services. Some of those who do have reached high rank and respect.
Don't you think that it would be dangerous for non citizens to service in the armed forces or police of your country especially as they have been denied citizenship for over 70 years.

s.o.s. "Remember that the current language spoken now in Israel is artificial... created 150 years ago"
What utter nonsense you write. It is the same language used by Jews ever since the days when the Bible was written over 5000 years ago.
Take a page of a Hebrew Bible and take a page of one of today's Hebrew Newspapers and you will see exactly the same letters and words.