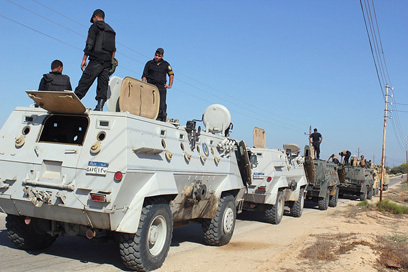 A suicide bombing claimed by the Islamic State group in North Sinai killed two people including a civilian Thursday, a day after the extremists beheaded four people there, medical and security sources said.

The bombing hit security forces stationed near a parking lot in the city of Sheikh Zuweid, the sources told AFP.

One member of the security forces was killed and three others wounded, they said, adding that a civilian was also killed in the blast.

Egypt's military confirmed in a statement that a soldier was killed in the assault.

Thursday's bombing comes a day after militants beheaded four civilians in the same area, according to the sources, after they allegedly collaborated with the Egyptian military.

In online statements, the Islamic State group claimed responsibility for the attack and the beheadings.

North Sinai has long been a hotbed of Islamist insurgents mostly affiliated to IS.

Last year, Egypt launched a massive offensive aimed at wiping out the militants in the restive region.

Hundreds of militants have been killed along with dozens of soldiers, according to official figures which cannot be verified as Sinai is largely cut off to journalists and independent investigators.