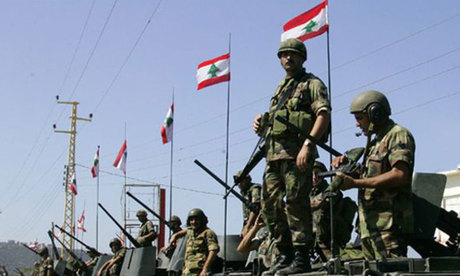 The Lebanese Army opened fire Wednesday evening at three Israeli drones hovering over the southern border town of Adaisseh, amid soaring tensions between Israel and Hizbullah.

An army statement said the military fired at a drone that flew over one of its posts in Adaisseh, forcing it to return to Israel.

"A second drone hovered over the Kfarkila region for a while before leaving Lebanese airspace," the army said, adding that "a third drone flew over the same post and was also fired at before returning to the occupied territories."

Voice of Lebanon radio (93.3) said the army fired at “two Phantom drones” after they “violated Lebanon’s airspace at low altitude opposite the public road in Adaisseh.”

Al-Mayadeen TV said the two “small drones” were flying over the army’s post in Adaisseh.

According to LBCI television, there is a decision by the army to “open fire on any drone spotted by the naked eye seeing as it does not have radars to detect such aircraft.”

In the wake of the Mouawad incident, Hizbullah chief Sayyed Hassan Nasrallah vowed to "do everything" to thwart Israeli drone attacks in Lebanon, threatening to down any unmanned aircraft that violates Lebanon’s airspace. He also pledged to retaliate from Lebanon against an Israeli airstrike that killed two Hizbullah members in Syria.

The Lebanese army never fired at Israeli drones before. Nassrallah gave the orders the other day and the army obliged. This goes to show who the actual commander in chief is.

it was last ashoura

The Lebanese army fired at all three drones and missed which is very acceptable seen how these machines operate and stuff, but Sayed Hassan claiming that one of the two drones hovering over Mouawad was actually downed by a rock, that looks more like the story of David and Goliath (which is complete bullshit).