Kurdish Forces Put Down Riot in Syria IS Camp 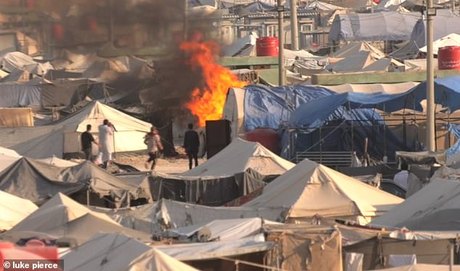 Riots broke out Friday in the Al-Hol camp in northeastern Syria which is home to thousands of relatives of suspected Islamic State fighters, Kurdish officials said.

The incident came as the Kurdish security forces in charge of the camp are being deployed en masse further north to try to hold of a massive Turkish cross-border offensive.

The Kurdish internal security forces known as Asayish were attacked by residents of the crowded camp, including groups of women.

The incident started when women staged a protest, refusing to obey the wardens' orders.

A Kurdish official at the Al-Hol camp told a media center affiliated with the Kurdish administration that the group started chanting "Allahu Akbar" (God is greatest) and throwing stones.

"The Asayish entered the camp and calmed the situation," the official said, predicting however that such incidents would likely happen again.

"They were rising up in an attempt to escape, to get past Asayish so they could escape. But until now no-one escaped," the official added.

Kurdish and foreign officials have expressed fears that the Turkish invasion could create a security vacuum and a opportunity for mass breakouts.

Many Western countries have so far refused to repatriate the thousands of foreign IS suspects and relatives who are being held by the Kurds.

The chaos caused by the three-day-old military offensive in northeastern Syria has heightened the pressure on those countries to find a solution to the problem.

The U.S. already plucked two of the most high-profile IS jihadists to have been captured alive and spirited them out of Syria.

Al-Hol is massively overcrowded and has been described as the last bastion of the IS "caliphate" that was officially wiped out in March as a result of a months-long SDF-led operation.

While some detainees and IS families want to return to their towns and countries of origin, many are unrepentant and openly continuing to promote IS ideology.

One woman was killed last month in unclear circumstances but incidents have been on the rise in Al-Hol, which is home to around 70,000 people, mostly women and children.