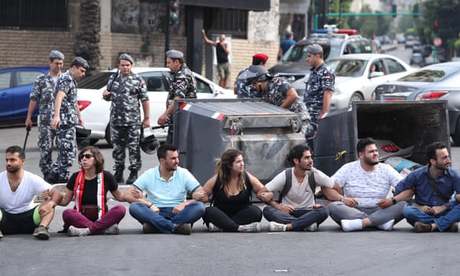 The security forces reportedly postponed until Monday a plan set to reopen major roads and highways blocked by protesters “due to last minute complications,” al-Joumhouria daily reported on Monday.

The daily said the plan implementation was supposed to take place Sunday at dawn.

On Saturday, a security meeting took place at the army headquarters which included, together with its commander, General Joseph Aoun, all the leaders of the security and military services. The meeting discussed the current situation in the country in light of the ongoing demonstrations and the ongoing blocking of roads and major highways, according to al-Joumhouria.

The security and military forces agreed to share a mission in order to "restore normal movement in the country without clashing with demonstrators," sources of the interlocutors told the daily.

The tasks were "distributed among security apparatuses to facilitate the freedom of movement of citizens on key roads, taking into consideration the safety of demonstrators," added the source.

Hundreds of thousands of Lebanese poured into the streets after the government floated a new tax on WhatsApp on the heels of an austerity package that came in response to an increasingly severe fiscal crisis.

The protests rapidly escalated into an indictment of the entire post-civil war order, in which a sectarian power-sharing arrangement has transformed former warlords and other elites into a permanent political class.

In the three decades since the war ended, the same leaders have used patronage networks to get themselves re-elected again and again even as the government has failed to reliably provide basic services like electricity, water and trash collection.

lol @blacacabla
the joke of the day
like every single day