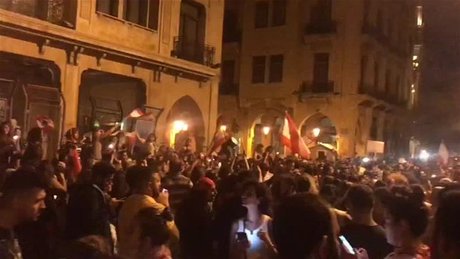 Thousands of women gathered Wednesday evening near the seat of government in Beirut’s Riad al-Solh Square, carrying candles as some banged on saucepans.

"O patriarchal powers, women's rights are not a footnote," they chanted.

Other pot-banging protests were also held in other parts of the country as some citizens staged similar expressions of solidarity on their balconies.

In the Ramlet al-Bayda area on the Beirut waterfront, security forces and activists clashed after protesters tried to enter into the Eden Bay resort, denouncing what they say is illegal privatization of public property.