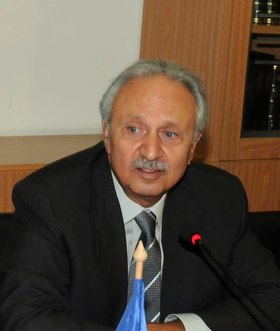 Lebanon's former finance minister has backed down from becoming the protest-hit country's new prime minister, after reports of his nomination sparked ire among demonstrators railing against the ruling elite.

Wealthy 75-year-old businessman Mohammed Safadi said it would be difficult to form a "harmonious" government in the country rocked by a month of unprecedented nationwide protests demanding radical reform.

The tycoon said in a statement that he hoped outgoing prime minister Saad Hariri, who resigned on October 29 under pressure from the street, would be reinstated.

Protesters, who see Safadi as emblematic of a corrupt and incompetent establishment, had reacted angrily on Friday to media reports that key political players had chosen him for the top job.

Although there was no official confirmation of his nomination, demonstrators gathered in front of one of his properties in his hometown of Tripoli to protest against what they regarded as a provocation.

It came as the U.S. embassy in Lebanon on Saturday expressed support for the cross-sectarian protest movement that has swept the Middle Eastern country since October 17.

"We support the Lebanese people in their peaceful demonstrations and expressions of national unity," the embassy said on Twitter.

Several mass rallies are planned for Sunday in cities across Lebanon to keep up the pressure on the country's rulers, widely seen as irretrievably corrupt and unable to deal with a deepening economic crisis.

The government has stayed on in a caretaker capacity since stepping down.

Some local players, notably Iran-backed Hizbullah, have accused "external parties" and Western embassies of supporting the popular uprising, including through financial backing.

On Saturday, a so-called "revolution bus" traversed the multi-religious country from north to south, decorated with the names of protest hotbeds.

According to protesters, the initiative sought to break down geographical and sectarian barriers and overcome the collective trauma of the 1975-1990 civil war.