Online Solidarity with Lebanese Protesters who Lost Their Eyes 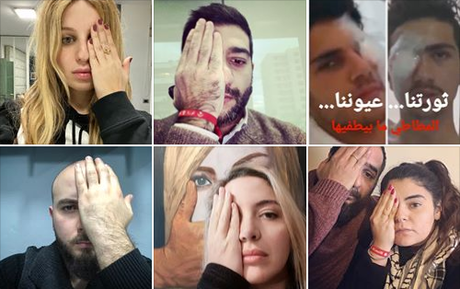 Lebanese activists on Monday launched a social media campaign to express outrage and solidarity with anti-government protesters who lost eyes after being hit by rubber bullets fired by riot police.

The activists posted pictures of themselves covering one eye under the Arabic hashtag “Our Revolution Is Your Eyes”.

Two protesters reportedly lost an eye each after being hit by rubber bullets in Sunday evening’s demo in central Beirut.

In another show of defiance, demonstrators who said they took part in the weekend protests used the Arabic hashtag "The Infiltrator Is Me" and disclosed their full personal details in response to accusations by authorities that “infiltrators” are taking part in the demos.

More than 540 people, including protesters and security forces, were wounded in the weekend violence in central Beirut, according to a toll compiled by AFP from figures provided by the Red Cross and Civil Defense.

Lawyers and rights groups have condemned "excessive" and "brutal" use of force by security forces, who they said hit protesters on the head, face and genitals.

The violence also drew condemnation from the United Nations, which called the crackdown "unacceptable."

A 22-year-old protester, who asked not to be named for security reasons, said he was severely beaten by security forces until he was bleeding in the head.

"Four of them were beating me with batons," said the man, who has been in the hospital since Saturday.

"Then they dragged me on the ground before they started kicking me," he told AFP.

"One of them slammed the base of a tear gas launcher against my mouth, another jabbed my face."

Lebanon has been without a government since prime minister Hariri resigned on October 29 in the face of popular pressure.

"The ruling elite is going back to its traditional bickering over their shares in government" said Bashar al-Halabi a researcher at the American University of Beirut.

"This has laid the foundation for a more violent approach by initially peaceful protestors."

Protesters have demanded a new government be comprised solely of independent experts, excluding all established political parties -- a demand analysts say is a tall order.

The political impasse is worsening an already-dire economic crisis that the World Bank says may see the number of people living in poverty climb from a third to half the population.

So THAT's the reason why the Iranian Revolutionary Guards and their militias in Iraq have to use real bullets against the demonstrators in Iran and Iraq, they can't get their hands on Israel's rubber-coated-bullet technology. Further proof the thousands civilian demonstrators who were killed in Iran and Iraq by the Iranian Revolutionary Guards and their Iraqi militias are Israel's fault.

While Iran export their rocket technology and terror manuals to anyone named Hassan or Hussein...