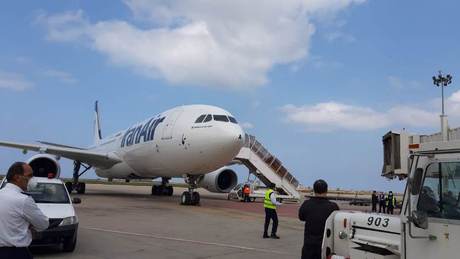 Another plane coming from Iran landed Monday at Beirut’s Rafik Hariri International Airport despite the outbreak of coronavirus in the Islamic Republic prompting neighboring countries to close their borders.

The National News Agency said that precautions were put in place for the evacuation mission and that passengers and crew were subject to examination to manage coronavirus transmission risk.

MTV station's reporter at the airport said another plane will arrive in Beirut in the afternoon. He added that planes coming from infected countries will land on distant runways and passengers will be allowed to leave the airport through special gates dedicated for that purpose.

Noting precautionary measures taken at the terminal, MTV said two equipped security men will board the Iranian plane to check the passengers and passports.

MTV initially reported that passengers who show no signs of illness would be allowed to leave on a bus dedicated for travelers coming from infected countries. The TV network later reported that "all passengers of the Iranian plane left the airport from its main gate, wearing masks and gloves."

A man claiming to be one of the passengers, Hassan Shahien, meanwhile announced on Facebook that the passengers left on a bus belonging to the pilgrimage agency and not "special buses."

"They took our names and phone numbers and checked if we had fever. They asked us whether anyone was feeling any symptoms and allowed us to leave," he added.

Later in the day, an Italian plane landed at the airport and a specialized team from the Health Ministry carried out the necessary medical check-ups for those on board.

"None of the Italian plane passengers was quarantined after no one showed any coronavirus symptoms," MTV said.

Another catastrophe in the making. It seems that the incubation period is longer than fourteen days and that some infected patients can be undetectable by the sophisticated gadgets of advanced countries, which I am pretty sure we don't have in Lebanon.

Remember a while before the October revolt the state couldn't stop a huge fire because our fire fighting airplanes were kaput, then what guarantees can they really give us on this ramping disease?

Kizb and Amal are going start feeling some pressure pretty soon, and they don't have a good comeback for it. Iraq, Kuwait and other countries have closed their borders and direct flight with Iran, and why can't they do it here?

...because it is on these flights that hezbollah gets its cash and terror equipment from Iran.

lol @ 'the rest will be quarantined at home'

Great i Commute to see my family in Lebanon a couple times a week from the GCC like so many trying to make a living and supporting out family back in Lebanon...
Now Kizb and Amal and Aouns are going to end up having my country blocked by every country and NOW how do i go see my family in Lebanon..,???
Tfeh Tfeh Tfeh. I hate you Berri and Harri and Aoun and Jumblat and Nassri and Alllllll of them .... if i missed any one hate them tooo

Shame on this biased government. It is putting people's lives at mortal risk by not banning flights to/from Iran.

and not one single word from amal or hezbollah over this... seems everything is normal....