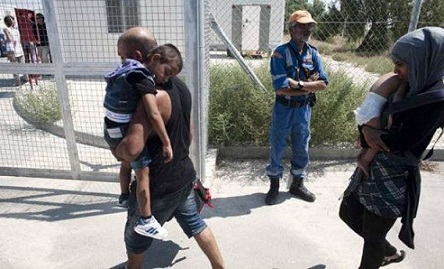 He was arrested on Tuesday after Cyprus marine police located the Syrians off the Cape Greco region in a crowded 15-meter (49 foot) craft and towed the boat to a fishing shelter in Paralimini on the south-east coast.

On Wednesday the suspect appeared before a court in Paralimini and was remanded in police custody for eight days on suspicion of helping migrants enter the country illegally for profit, a police spokesman said.

Head of the police operation Petros Zeniou said the migrants were checked by health workers for coronavirus before being brought to shore for processing.

Among the migrants were 43 children -- nine of them unaccompanied -- and 13 women, including four who were pregnant.

The Syrians -- mainly from the northern regions of Idlib and Aleppo -- were sent to a reception center outside the capital Nicosia.

Zeniou said the boat set off from Mersin in Turkey, a route often used by people smugglers bound for Cyprus.

He said an initial police investigation indicated the migrants had paid between 2,000-4,000 dollars each to make the journey by boat from Turkey.

"We are on the alert, there is certainly information that more boats are likely to depart from Mersin," said Zeniou.

On Tuesday, Republic of Cyprus President Nicos Anastasiades said his country fears a migratory influx after Turkey allowed refugees to leave for the European Union.

Turkey is home to around 3.6 million Syrian refugees and many other migrants from countries including Afghanistan use Turkey as a transit country to Europe.

Following the deaths of over 30 Turkish soldiers in Syrian regime fire last week in Idlib, Turkey opened its borders with Europe to refugees and migrants.

The Republic of Cyprus, an EU members, says it is on the frontline of the Mediterranean migration route with the highest number of first time asylum seekers per capita.

But Cyprus, located 160 kilometers (100 miles) from the Syrian coast, has not seen the massive inflow of migrants experienced by Turkey and Greece.