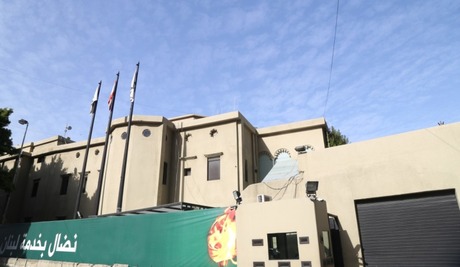 Unknown assailants opened fire at dawn Sunday at the headquarters of the Kataeb Party in Beirut’s Saifi area, hitting it with six gunshots, the party said.

In a statement, Kataeb said the attackers used machineguns, calling on the state and its security agencies to “unveil the identity of the assailants and instigators.”

“The Central House will remain open to all Lebanese and a spearhead in the battle for sovereignty, freedom and dignified living,” the party added, noting that its HQ has “embodied independence and freedom, has been dubbed as the House of the People by the October 17 revolution, and has become the gathering place of revolutionaries and free people of various sects, belongings and orientations.”

The party “which was not dissuaded by storms and tornadoes throughout 84 years will not be intimidated by juvenile acts… or cheap and petty political messages,” Kataeb stressed.

Anti-government protesters and wounded demonstrators had sought refuge at the headquarters during confrontations with riot police in recent months.

On Saturday, Kataeb Party chief MP Sami Gemayel had criticized the government in connection with the issue of the Eurobond debt and its decision to default on it.

“All what we heard was a declaration of the state’s bankruptcy and a disclosure of the reality of net foreign currency reserves at the central bank,” he added.

We won't use our arms or point our arms at the Lebanese people. Is that what they said? Another example of May 7, the assisinations of 2005, and the saga continues.

And you wonder why the Lebanese side with America and Israel against their own Lebanese citizens?
Why some Lebanese disarm but others do not AND to top it off, they take the entire state as hostage and its defaulted meaning no one will,ever come invest in Lebanon except those carrying corona virus from Iran.

thanks for reading me how crazy lebanese news is! just another day in lebanon, i'll go fire my machine guns today with full impunity of the law.

get a new tagline. those simple phrases and lines work only on indoctrinated simpletons. Try to convince the educated and the inquisitive.

I hate the guts of the Gemayel family; Bashir was a murderer who ordered the butchery of his own people in order to bring discipline into the Christian militias' ranks and don't forget Black Saturday and other massacres!
What Chehab had settled, the Gemayel have destroyed and they were so proud by their nazi salute that el Cheikh Pierre brought with him back from the Olympic Games in Germany.
Late Pierre was in school with me when his asshole and corrupted dad was president and let me tell you that he didn't look like the honorable martyr depicted in the propaganda pictures; he was a thug surrounded by the scum of that school by that time when scums and thugs ruled the country (which has not changed, just that it was Kataeb before and now it is Ebola).

You bring the word discipline for the man who only managed the country in 21 days of presidency to get every single institution and employee inline ?
What do people only see one angle of the equation but not the other? What's wrong with starting with your own house first then set the example for others to follow.

Why do not we put on TV those who continue to carry arms and fire at people, buildings live ammunition.

The difference between you and me, The people I support did in fact disarm, but your people until thus day and after the world I mean entire world Saw what Basel regime did to Lebanon and his own people, you continue to say Tahya Sourya and place Syria first than Lebanon.