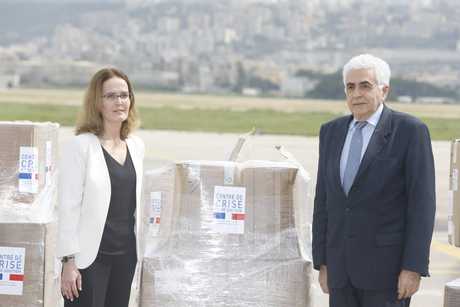 Lebanon on Monday received a French medical shipment aimed at assisting the country in confronting the COVID-19 coronavirus.

In a statement, the French Embassy said the shipment was sent following “an official request from Lebanese authorities.”

“In solidarity with Lebanon, France sent around 500 kilograms of medical protection equipment to the Rafik Hariri hospital,” the statement said.

“France will continue to support the global efforts in the face of this pandemic,” the statement added.

Lebanon has so far confirmed 32 coronavirus cases and an emergency ward has been opened at the state-run Rafik Hariri hospital in Beirut to receive suspected cases and quarantine confirmed ones.

The country closed educational institutions, sport clubs, nightclubs, fairs and other venues and urged against gatherings, after Health Minister Hamad Hasan announced that Lebanon is no longer in the containment phase regarding the virus. On Monday the minister clarified that there is “a limited and not a general spread of the virus.”

don't forget, they are just defending Total and their interests..... who is in charge they don't care.