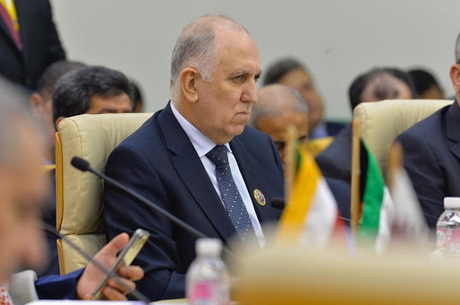 Interior Minister Mohamed Fahmi said that some of the incidents and insults that triggered clashes between protesters in Beirut over the weekend were “intentional and premeditated,” al-Joumhouria daily said on Monday.

“We had strong indicators that a fifth column could interfere in the demonstrations to trigger tension and sedition, and this is exactly what happened” Fahmi told the daily.

He said he was totally convinced that the violence, clashes and sectarian insults were deliberate and planned in advance, noting that investigations are ongoing with individuals detained at the scene to uncover the details and circumstances.

However, he assured that the security forces are in control and always ready to shoulder their responsibility to protect civil peace and internal stability.

“It is inadmissible to trigger sectarian strife, no matter what it costs," he said.

Riots and sectarian tensions erupted in central Beirut and other areas Saturday overnight, leaving dozens of people injured, including 25 soldiers, as the Lebanese military warned that the clashes had endangered national unity.

The Lebanese Red Cross said 48 demonstrators were wounded, 11 of whom were hospitalized.

Shooting broke out in several areas around Lebanon after videos circulated on social media showing some supporters of Hizbullah and AMAL chanting sectarian insults.

Saturday’s protests were the largest since the government last month began gradually easing a lockdown aimed at curbing the spread of the coronavirus.

Nationwide protests against Lebanon's political leaders had erupted on Oct. 17 amid an unprecedented economic and financial crisis, but were eventually put on hold due to the pandemic.

....definitely 'Planned' by the Israeli-Saudi-American axis who paid and forced "supporters of Hizbullah and AMAL to chan sectarian insults"

Oh really..you are kidding right? Let's the assume the media is nasty..Do members of your own security forces report to you what's happening every time there is a peaceful demonstration...why is it always the dark shirt boys use sticks, stones and on the attack of citizens properties and cars with graffiti at all times..

as the interior minister can you tell us who planned it? or is it just words in the air to deflect the issue?