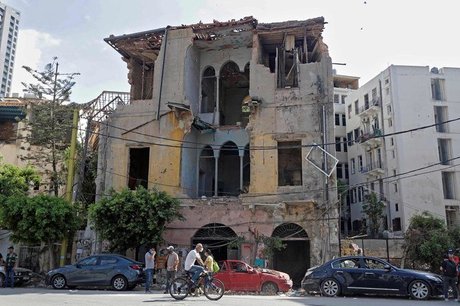 The effects of the blast were felt all over the Lebanese capital but some of the worst damage was in the Gemmayzeh and Mar-Mikhael neighbourhoods a short distance from the port. Both are home to a large concentration of historic buildings.

"The international community has sent a strong signal of support to Lebanon following this tragedy," said Ernesto Ottone, assistant UNESCO Director-General for Culture.

"UNESCO is committed to leading the response in the field of culture, which must form a key part of wider reconstruction and recovery efforts."

Sarkis Khoury, head of antiquities at the ministry of culture in Lebanon, reported at an online meeting this week to coordinate the response that at least 8,000 buildings were affected, said the Paris-based organisation.

"Among them are some 640 historic buildings, approximately 60 of which are at risk of collapse," UNESCO said in a statement.

"He (Khoury) also spoke of the impact of the explosion on major museums, such as the National Museum of Beirut, the Sursock Museum and the Archaeological Museum of the American University of Beirut, as well as cultural spaces, galleries and religious sites."

Even before the explosion, there had been growing concern in Lebanon about the condition of heritage in Beirut due to rampant construction and a lack of preservation for historic buildings in the densely-packed city.

The explosion on August 4, which left 171 people dead, has been blamed on a vast stock of ammonium nitrate left in a warehouse at the port for years despite repeated warnings.