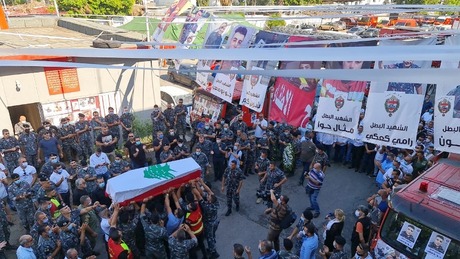 Beirut is still bidding farewell to the victims of the port explosion that shook the city two weeks ago, the last of which was firefighter Joe Bou Saab and 15-year-old Elias El-Khoury, Asharq el-Awsat newspaper reported Friday.

Bou Saab was laid to rest Friday, while Khoury succumbed to his wounds on Thursday.

Meanwhile, Lebanon’s Bar Association announced on Thursday the launch of a relief National Coordination Commission to help those affected by the deadly Beirut port explosion.

The August 4 blast flattened large parts of the capital, leaving more than 180 dead, thousands wounded and hundreds of thousands without a home.

Head of Beirut Bar Association, lawyer Melhem Khalaf, announced the launch of the commission in a press conference to strictly "assist the victims of the port explosion and rebuild Beirut."

He said the commission was established in cooperation between the Bar Association, engineers, contractors, the Industrialists Association and others.

Its mission is to implement a comprehensive plan to rebuild Beirut, “stone and human,” said Khalaf, “through coordination among all the capabilities currently working on the ground, receiving and distributing aid in a transparent and effective manner.”

Khalaf Hailed the “gigantic” efforts of the Lebanese army and its endeavors to make this commission succeed.

Meanwhile, Governor of Beirut, Judge Marwan Abboud, stated that surveys to determine the damage caused by the explosion are ongoing, pointing out that one phase to assess the damage to housing units threatening public safety has been concluded.

“Our concern today is to get people out of these houses. Strengthening these buildings and fixing the houses to let people back to their homes constitutes the third phase,” Abboud said.

Meanwhile the FPM are circling the wagons around Badri Daher.

When an Indica met a Sativa it made Hassan Nasrallah!