After Beirut Port Blast, Future Lawsuits Pile up against the State 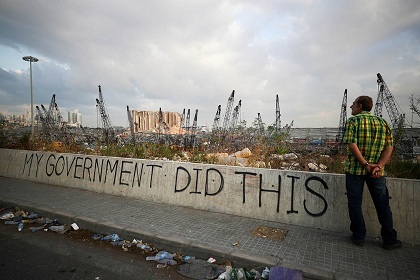 Elie Hasrouty, who lost his father to the August 4 Beirut port blast, is one of at least 1,228 grieving Lebanese preparing to file a lawsuit against the state.

The young computer engineer said going to court won't bring his father back, but it could go some way towards preventing similar disasters from happening again.

"We are pursuing legal action (for) us, the people who remain in this country and who want to live in it with dignity," he told AFP.

Hasrouty's father, Ghassan, was among the more than 190 people killed in the mega-blast, caused -- the authorities say -- by a large stockpile of ammonium nitrate blowing up.

The explosion, one of the largest non-nuclear blasts in history, also wounded at least 6,500 people, and ravaged swathes of Beirut.

Ghassan worked for most of his life in a control room in the shadow of the port's giant silos, right next to the epicentre of the explosion.

He was buried so deep under rubble, wheat and corn that the foreign rescue teams who rushed to the scene never stood a chance of pulling him out alive.

His body was found two weeks after the blast.

His son said the point of legal action was not "retaliation" against the authorities, whose negligence and corruption are widely blamed for the blast, but rather to address the underlying conditions that led to the disaster.

"We need to determine who is responsible as well as all behaviour that led to this situation, so that the issue is addressed and proper measures are taken to deter similar conduct in the future," he said.

"What's the use of... prosecuting those who will be found guilty if (official) conduct does not change?" he asked.

The Hasrouty family is one of at least 1,228 families who have turned to the Beirut Bar Association to file complaints they hope will become lawsuits against the state, as Lebanese law does not allow for class action procedures.

The Beirut Bar Association is offering its services pro bono as part of an accountability drive it launched after the blast, assigning a lawyer to each of the cases it is currently handling.

"We can't stand by idly in the face of a tragic crime of this kind," Melhem Khalaf, the head of the association, told AFP.

"We are not seeking revenge in any way. We only want justice."

With an army of 400 volunteer lawyers and 200 legal aides, the Beirut Bar Association has set up seven makeshift centres in blast-hit districts in the aftermath of the explosion, Khalaf said.

They have been backed by more than 450 real-estate appraisers who helped assess the cost of damages suffered by the claimants.

Staring at a computer at the association's Beirut headquarters, lawyer Ali Jaber gave a break-down of the cases.

So far, more than 82 percent of all cases brought to the Beirut Bar Association involve people whose complaint focuses on material losses as a result of the blast, according to Jaber.

Those who sustained injuries as well as material losses make up around seven percent of future claimants, while those whose complaint centred solely on injuries accounted for three and a half percent, he said.

A little over one percent have lost a relative to the blast.

Jaber said claimants would seek first to establish responsibility through a verdict before any second lawsuit for compensation from the cash-strapped state, as Lebanon grapples with its worst economic crisis since the 1975-1990 civil war.

A long history of high-level impunity in Lebanon has pushed many of the country's citizens at home and abroad to call for an international probe into the blast -- a demand now backed by Western powers and rights groups.

But Lebanese authorities have rejected such a proposal, favouring instead a local investigation that has so far yielded the arrest of some 25 people.

They include the head of the Beirut port and its customs director, but not a single official in government or parliament.

The US Federal Bureau of Investigation (FBI) and French experts have been assisting Lebanese authorities in a probe that has yet to establish a cause for the blast almost seven weeks later.

Amnesty International this month said an "international fact-finding mechanism" is the only way to "guarantee victims' rights to truth, justice and remedy".

But the government has instead referred the investigation to "the Judicial Council, a court... whose proceedings inherently lack independence and impartiality", Amnesty said.

With political forces routinely exercising influence over judges to bypass accountability, a frustrated Khalaf called on the ruling elite to "leave the judiciary alone".

"A crime of this scale cannot be caught up in political disputes," he added.

"Knowing the truth and achieving justice would comfort people and let them live in peace."