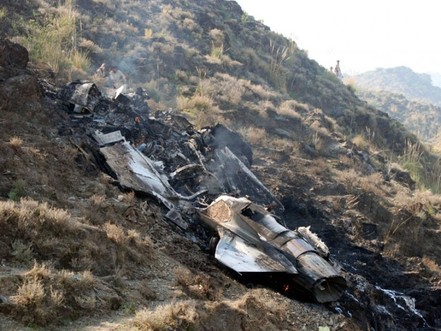 "The pilot and the co-pilot of an F-14 plane that crashed this morning have been martyred," the news agency quoted the governor of Bushehr province on the Gulf coast, Jafar Pourkabgani, as saying.

"The plane crashed due to technical failure and the investigation is ongoing," he added.

Iran retains a fleet of U.S.-manufactured aircraft that it bought before the Islamic revolution of 1979.

Sanctions against Iran's controversial nuclear program have taken a heavy toll on Iran's ability to maintain the fleet.

Iran has suffered a string of serious air accidents over the past decade that have cost more than 900 lives.

Wow.....what an air force!!! Can't they even afford some crappy Russian planes that are 20 years newer? I am sure the US, France and other are shaking from the power of the Iranian air force.

not for nothing but that looks like a MiG-29 afterburner can, not a F-14's