IS Attack Kills 19 in Central Syria 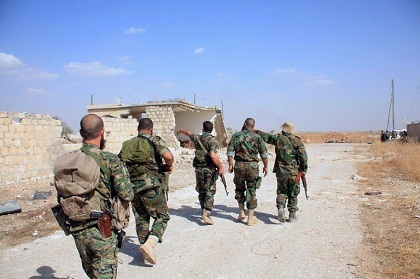 "Nineteen regime fighters and allied militia forces were killed in an IS attack, including 11 members of the Baqir Brigade," a local Iran-backed militia, the Syrian Observatory for Human Rights said.

The war monitor said the "surprise attack" on Wednesday morning targeted regime positions in eastern Hama, the site of recent clashes between regime forces and jihadists.

Observatory head Rami Abdul Rahman called it the deadliest IS attack this year.

IS overran large parts of Syria and Iraq and proclaimed a cross-border "caliphate" in 2014, before multiple offensives in the two countries led to its territorial defeat.

The group lost its last scrap of territory in Syria in March 2019, but in recent months it has ramped up attacks against regime forces, especially in the east of the country bordering Iraq.

In December last year, IS killed nearly 40 Syrian troops in an ambush of a bus carrying soldiers travelling home for the holidays.

According to the Observatory, IS attacks have killed more than 1,200 regime fighters and allied militia forces since March 2019.

The war in Syria has killed more than 387,000 people since it started in 2011, the Observatory says.