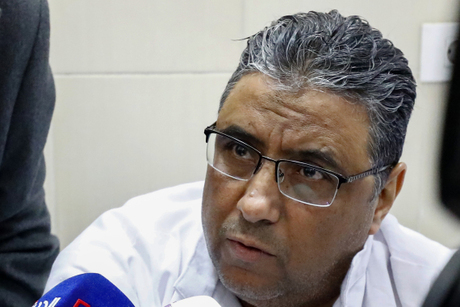 Egypt has freed a journalist for Qatar's Al Jazeera, a security source said Friday, after four years in jail without trial following the end last month of a rift between the two Arab states.

Mahmoud Hussein, an Egyptian national who had been imprisoned since December 23, 2016, was released on Thursday night, the Egyptian security source told AFP without elaborating.

But Gamal Eid, head of the Arab Network for Human Rights Information, said that while the decision to release Hussein had been taken, "he has still not returned home and is still being held".

The 54-year-old was detained in Cairo when he returned for a family holiday, and was accused of incitement against state institutions and spreading false news.

Qatar's Al Jazeera -- which has run a daily campaign calling for his liberation -- did not immediately confirm his release. It has repeatedly said he was being held "without formal charges nor trial".

Egypt, along with the United Arab Emirates and Bahrain, followed the lead of Gulf powerhouse Saudi Arabia and cut ties with Qatar in June 2017, alleging it backed radical Islamist groups and was too close to Riyadh's rival Iran -- claims Doha denied.

"Releasing Hussein could indicate a sign of goodwill from Cairo to Al Jazeera that it wants a thaw in its relations with the news channel," said King's College London assistant professor Andreas Krieg.

"But overall this is more about polishing its terrible human rights record a bit vis-a-vis the (US President Joe) Biden administration," he said.

"The new tone and priorities in Washington really created fears in Egypt that America will sever relations."

Egyptian analyst Amr El-Shobaki said Hussein's release could be linked to rumored plans to review of the status of prisoners in the country.

"There are those... who believe there should be a change concerning prisoners held in cases related to freedom of expression," particularly in light of the new US administration, he said.

In May 2019 prosecutors ordered Hussein be released, but a week later he was slapped with another set of charges and ordered to stay in detention.

Al Jazeera was caught up in a spat between Cairo and Doha after the 2013 military ouster of Egypt's Islamist president Mohamed Morsi, who was backed by Qatar.

Cairo considered it a mouthpiece for Morsi's outlawed Muslim Brotherhood movement, and access to its website has been blocked in Egypt since 2017.

"For Egypt, Al Jazeera remains the most important nuisance in the relationship with Qatar," said Krieg.

Faced with accusations similar to those levelled against Hussein, they were released in 2015 after receiving pardons from President Abdel Fattah al-Sisi.

Sisi's government is regularly accused of crushing all forms of dissent and repressing political opponents.

Under his rule, authorities have jailed thousands of Morsi's Islamist supporters as well as liberal and secular activists, including popular bloggers, actors, singers and journalists.

The Committee to Protect Journalists had said that as of December 2020, at least 27 journalists were imprisoned in Egypt in relation to their work, including several from Al Jazeera.

"It may be purely random timing. But it wouldn't be surprising if the Egyptian government sought ways to remove barriers to ever greater Qatari investment," said David Roberts of King's College London.

Tobias Borck of the Royal United Services Institute noted that the day after the Gulf summit renewing ties with Doha, a Qatari delegation was in Cairo for the inauguration of a Qatari-owned hotel.

"I am not sure to what extent this particular move is part of a thawing in relations," said Borck.

"But it is rather obvious that Cairo and Doha have been in touch for a while -- the opening of the $1 billion St. Regis in Cairo the day after the Al-Ula Summit made that pretty clear."