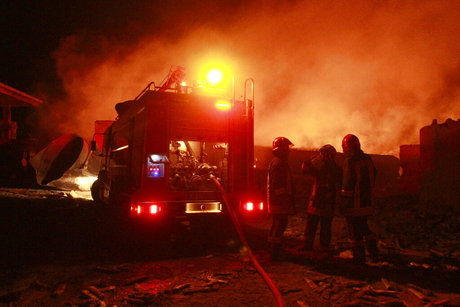 At least 100 oil and gas tankers have been destroyed by fire in a "catastrophe" at Afghanistan's biggest trade crossing with Iran, causing millions of dollars of losses, officials said Sunday.

The huge blaze, which broke out Saturday afternoon at Islam Qala port 120 kilometers (75 miles) from the western city of Herat, has been contained and an investigation launched into its cause.

"We were told that 100 or 200 tankers have been destroyed, but this number could be higher," Jailani Farhad, spokesman for the governor of Herat province, said after visiting the scene.

During the blaze looters descended on the site, stealing goods that were being imported and exported across the border, Younus Qazi Zada, the head of the Herat Chamber of Commerce said.

"The catastrophe was much bigger than imagined," he said, adding: "Unfortunately, irresponsible people have looted a large number of goods."

Qazi Zada said initial estimates were of "millions of dollars of losses".

Farhad added that investigators needed more time to examine the extent of damage.

Videos posted on social media on Saturday night showed the towering fire and huge clouds of thick black smoke billowing into the sky.

On Sunday security forces opened fire on a vehicle, killing one man, after the driver failed to stop at a checkpost that had been hastily set up to prevent suspected looters from entering what was left of the customs office compound.

An AFP photographer said hundreds of people had gathered at the site, trying to get access to the trucks.

Around 20 people were injured in the fire, according to Herat health officials.

Damage to power lines from the incident left large parts of Herat province without power on Sunday.

- Trucks fled over the border -

Islam Qala is one of the major ports in Afghanistan, through which most official trade with Iran is conducted.

Kabul has waivers from Washington allowing it to import oil and gas from Iran despite US sanctions.

Traders have been asked to use alternative border crossings.

The Taliban has regularly attacked fuel tankers they suspect of supplying foreign troops in the country.

In 2014, the hardline group destroyed more than 200 fuel trucks on Kabul's outskirts in an attack.

There was no indication that militants were behind Saturday's blaze.

However, insurgents assaulted a nearby security post shortly after the blaze broke out, taking advantage of the situation, Farhad said Saturday.

Security forces have been deployed around the port area.

Afghanistan has been hit by a surge in violence despite ongoing peace talks between the Taliban and the Afghan government, which have so far failed to achieve a breakthrough.

The rise in violence has led US President Joe Biden's administration to launch a review of a deal signed between Washington and the terror group last year that paved the way for the withdrawal of all American troops in the coming months.