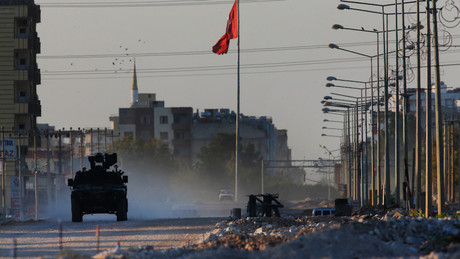 Turkish border guards have detained five Russians, including a woman suspected of being a member the Islamic State group, and a Libyan who were attempting to cross from Syria, officials said Wednesday.

It was not immediately clear whether all six were suspected of being members of the jihadist group.

"Our border guards stationed in Hatay's Narlica district (in southern Turkey) caught six people including one Libyan and five Russian nationals who were attempting to illegally cross into Turkey from Syria," the ministry tweeted in English.

"One of the Russian nationals was a woman identified as a wanted Daesh member," it said, using an Arabic acronym for the extremist group.

In a separate incident, Turkish authorities this week also arrested a 26-year-old woman with her two children near the Syrian border, accused of links to the IS group.

The woman, who held both New Zealand and Australian passports until Canberra revoked her Australian citizenship last year, sparked a row between the two countries.

New Zealand's Prime Minister Jacinda Ardern on Tuesday accused Australia of shirking its responsibilities and said it was "wrong" to expect New Zealand to accept the woman.

Turkey has stepped up the fight against IS jihadists who carried out deadly attacks on its soil, including a mass shooting at an upscale Istanbul nightclub just minutes into the New Year of 2017.

The attack killed 39 people, including 27 foreigners.