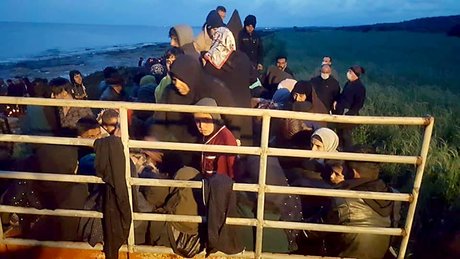 Cyprus hit out at Turkey on Friday for acts it said were behind the creation of a new migration route that had "disproportionally burdened" it with the EU's highest percentage of asylum-seekers.

The Republic of Cyprus, a member of the European Union since 2004, has seen a surge in asylum-seekers in recent weeks and months.

Many enter by illegally crossing the UN-patrolled buffer zone that divides the island between the Greek-majority south and a breakaway Turkish Cypriot state in the north.

Cyprus said it has had the highest proportion of asylum applications in the EU for four consecutive years, at four percent of its population compared with the bloc's average of close to one percent.

"The overwhelming majority of migration flows originated from Turkey, a country that fails to implement all agreements regarding migration towards Cyprus," its foreign and interior ministries said in a joint statement.

"In fact, Turkey's stance has led to the creation, rather than prevention, of a new migration route in the eastern Mediterranean, which disproportionally burdens Cyprus, and places enormous strain on the national asylum system."

Nicosia would raise "the extent of the migration crisis faced by Cyprus" in Brussels to ensure it "receives the assistance required to effectively address it", the statement said.

It said there was an "urgent need" for the European Commission and international organisations to assist Cyprus to stop illegal migrant flows and ensure legal returns.

At a meeting on Thursday, Foreign Minister Nikos Christodoulides and Interior Minister Nikos Nouris had highlighted "the gravity and scale" and "disproportional weight Cyprus shoulders from migration flows", it added.

They agreed to ensure migration features prominently on their agendas ahead of a March 15 teleconference of EU foreign and home affairs ministers, as well as "upcoming discussions on Turkey at EU level".

Cyprus has the highest number of first-time asylum applications in the EU relative to its population, according to the bloc's latest statistics.

The republic registered 1,640 first-time asylum applications in the third quarter of 2020, a figure representing 1,848 per million of its population, Eurostat said.

In December, Nouris said that in 2019, Cyprus received approximately 17,000 asylum applications, an increase of more than 500 percent compared with 2015.