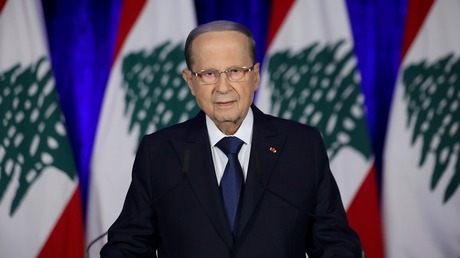 President Michel Aoun on Tuesday put on hold a decree expanding the sea area disputed with Israel, citing the need for a Cabinet meeting.

The decree was signed Monday by caretaker PM Hassan Diab and the caretaker ministers of public works and defense before being sent to the Presidency for an “extraordinary approval.”

“The draft decree received from the Premiership for the amendment of Decree 6433 requires a decision taken during a Cabinet session, according to the opinion of the Legislation and Consultations Committee” of the Justice Ministry, “even amid the presence of a caretaker cabinet,” the Presidency said in a statement.

“It is up to the president of the republic to specify what he sees best to preserve the country and he is entrusted with this according to the constitution and his oath,” the Presidency added.

“The President calls on the Lebanese to trust the strength of the Lebanese stance and he reassures them that things will only go in a manner that fully preserves Lebanon’s territorial and maritime rights,” the Presidency said.

“Mr. President takes into consideration the repercussions and all the circumstances that oblige him to take such stances that relate to the country’s safety,” Aoun says in the memo sent to the Premiership.

The amended decree signed by Diab and the two ministers would formally extend Lebanon's claims by 1,430 square kilometers.

Lebanon and Israel began indirect talks with U.S. mediation in October to reach a deal over the disputed area that is believed to be rich with oil and natural gas deposits. The meetings that stopped few weeks later were being held at a U.N. post along the border of the two nations that remain technically in a state of war.

The negotiations were the first non-security talks to be held between Lebanon and Israel, which have no diplomatic relations following decades of conflict. Resolving the border issue could pave the way for lucrative oil and gas deals on both sides.

In late October, the Lebanese delegation to the talks -- a mix of army generals and professionals -- offered a new map that pushes for an additional 1,430 square kilometers.

This area is to be included in Lebanese territory on top of the already disputed 860 square kilometer-area of the Mediterranean Sea that each side claims is within their own exclusive economic zones.

The developments come as U.S. Under Secretary of State for Political Affairs David Hale was expected in Lebanon on Tuesday to meet Lebanese officials.

Lebanon is passing through its worst economic and financial crisis in its modern history and had plans to start drilling in search for oil and gas in the disputed area this year.

In the first Israeli response to the move by the Lebanese ministers, Israeli Energy Minister Yuval Steinitz warned Monday that any “unilateral” Lebanese steps will be met by “Israeli counter-steps.”

“This is not the first time in the past 20 years that the Lebanese have changed their maritime maps for propaganda purposes and to express a ‘patriotic stance’, and by this they are obstructing themselves one time after another,” the Israeli minister added.

A case of buffoon deflated? No worry, Don Quixote and his Cavalry on the way!

Excellent news!!! now why don't you do the same with Syria they have sucked up 750KM of Lebaese territorial water and will be stealing the natural resources there!!

aouni justice at its best

The Military Court of Cassation has convicted Suzanne al-Hajj on charges of withholding information in the Ziad Itani case, sentencing her to 2 months’ jail and an LBP 200K fine.

Revolting, these judges must hang!