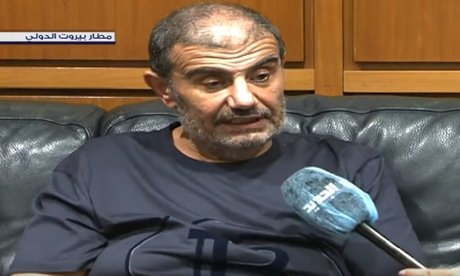 Prominent Lebanese music composer Samir Sfeir arrived in Lebanon Thursday after he was detained for more than a month in Saudi Arabia.

The National News Agency said he was welcomed at the airport by MP Salim Aoun of the Strong Lebanon bloc, prominent lyricist Nizar Francis, and several members of his family.

Speaking to al-Jadeed TV at the airport, Sfeir said he was detained over his political views and not over any drugs-related charges.

“I never spoke about the kingdom, I spoke about my country’s domestic affairs,” Sfeir said.

“They followed up on something very old that I said in 2013 in a comic show… and they considered that I mocked them,” the Lebanese composer added, referring to Saudi authorities.

“I feel that reports against me were sent from here (Lebanon),” he added.

Noting that he does not regret his political stances but rather his “aggressive approach,” Sfeir said his style of political activism was “wrong,” adding that he has “returned to his senses” and that he will “retire” from politics.

“I was questioned by four interrogators and the discussion was political. I was asked whether I had a link to Hizbullah’s military wing and I said that I had always voiced support for the army and stated that I was against armed and sectarian parties,” Sfeir added.

He revealed that he was also grilled about a tweet mentioning President Michel Aoun and Hizbullah chief Sayyed Hassan Nasrallah.

“I told them that I meant that the relation between the President and Sayyed Nasrallah had rescued Lebanon from Sunni-Shiite strife,” Sfeir added.

They should have executed him and rid the world of another evil sectarian aouni.

He is not welcome back!
This being said... Saudis are thugs! Who do they think they are!?

I think that question's answer depends on which Saudi you ask.

You don't curse a nation and its leadership and then go visit or live there. Sfeir did that and he holds a residence permit in Saudi Arabia. The Saudis have every right to question this thug in their country.

@barrymore
They cannot detain him for over a month just because his political views don't suit them.
He is a Lebanese citizen.
He is not a politician, nor a criminal. Just a small pos.

@barrymore
Nowhere have I read that he cursed KSA.
This being said. I curse Lebanon, Aoun, Hezbollah everyday and I wouldn't want to be arrested for it, whether in a Foreign or Domestic country.
Freedom of expression. Freedom of speech.
Those tactics are the kind used by Aoun who loves to throw in jail every person who curses him! To hell with that!

To add to what Barry mentioned above: If you live in the USA and you publicly support Bin Laden/ISIS on twitter and social media, would you be arrested and questioned by Homeland Security? I guess so

Hezbollah is classified as a terrorist organization in Saudi Arabia for obvious and justifiable reasons. Samir Sfeir is well known for his pro Hezbollah stances and made songs praising Hezbollah. It is only natural he is questioned specially that he has and his wife reside in KSA and have a business over there.

Well the patriot, I’m glad the “thugs” contributed to financing the reconstruction of Lebanon after the long civil war.

Go say in France you support Mehdi Nemmouche or Salah Abdeslam and see what happens to you. Hizbala is no different …

@i.report
The regime in Saudi has changed since them.
MBS is rogue.
He jailed Hariri.
He murdered Khashoghi.
I am for freedom of expression, and wouldn't accept to be jailed or turtured because my political views doesn't suit a regime.

Of course, freedom of speech is sacred, nobody will contradict you here. But every country has its own laws with more or less freedom. There are things one can or can’t do in the US and the same applies to KSA. If a Lebanese doesn’t like it, well no one forces him to go live in that particular country. ‘
As for khashoggi, remember he was a spy and a Muslim Brotherhood member, a terrorist organization. How many operatives do western powers murder without trial every year? Last time I checked, Both Bin Laden and Baghdadi were executed on foreign soil. Even Moamar Ghaddafi was ordered to be killed by Sarkozy. That’s the world we live in today.

But none of those listed above mediated to release the Lebanese rotting in Syrian jails!

It’s a shame they released him so early. They should have harvested his organs China-style .

lol @ “I feel that reports against me were sent from here (Lebanon),”

Below is an example of the Aouni mentality:

lol and the FPM and its 'leader' always call for a civil state:) repulsive hypocrites...