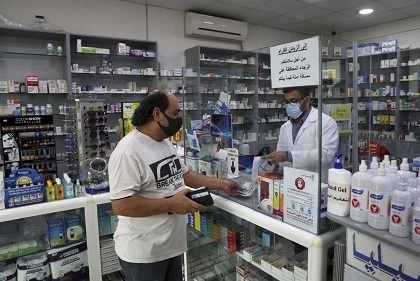 In light of a shortage in medicines in Lebanon, the Association of Pharmacies announced in a statement that it would “forcibly” stop working for one day on Friday in protest at the worsening conditions, media reports said on Tuesday.

The Association waved in a statement on Monday of "escalating" measures because of the crisis, and a shortage in baby milk formula that is being sold at the black market for hefty prices.

The Association complained about “failure of drug importers to deliver needed medicines to pharmacies.” They said that “more than a month has passed since drug importers stopped delivering medicines, mainly those for chronic diseases.”

“Our stock of infant formula has completely run out, while we find it available on social media pages at double prices, which indicates that some are monopolizing it in cooperation and coordination with some merchants or those who work with them,” added the statement.

They added that their move aims to bring attention to Lebanese officials that the crisis has touched "red lines," and Lebanon’s health, medicines and food security are seriously threatened.

Drugs for everything from diabetes and blood pressure to anti-depressants and fever pills used in COVID-19 treatment have disappeared from shelves around Lebanon.

Officials and pharmacists say the shortage was exacerbated by panic buying and hoarding after the Central Bank governor said that with foreign reserves running low, the government won’t be able to keep up subsidies, including on drugs.

More than half the population has been pushed into poverty and people’s savings have lost value. Public debt is crippling, and the local currency plunged, losing nearly 80% of its value.

The health sector is buckling under the financial strain and coronavirus pandemic.