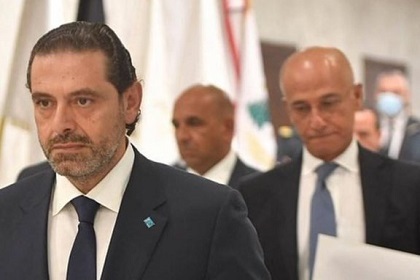 Prime Minister-designate Saad Hariri on Thursday announced that he is quitting the government formation mission, following talks with President Michel Aoun in Baabda.

“I met with the President and we held consultations over the government. During the discussions, the President requested essential changes and we discussed the issue related to the vote of confidence and the issue of naming the two Christian ministers,” Hariri said after a 20-minute meeting.

“I asked President Aoun if he needs more time to discuss the line-up but he answered that it seems that we won’t agree, that’s why I submitted to him my resignation and may God help the country,” Hariri went on to say.

Hariri had been nominated for the post in October 2020, as a long-running political and economic crisis intensified following a devastating port blast in Beirut in August that killed more than 200 people and forced the previous government to resign.

The development is likely to plunge the country further into chaos and uncertainty. Lebanon is going through an unprecedented economic crisis, described by the World Bank as one of the worst in the world in 150 years.

Hariri's move comes after weeks of a stalemate in renewed efforts to resolve the political deadlock and following a quick trip to Cairo, a close ally. In a meeting with Aoun on Wednesday, Hariri had proposed a new 24-minister Cabinet line-up and said he expected a response from Aoun by Thursday.

Hariri, 51, resigned from his post in October 2019 in a bow to nationwide protests which had demanded major reforms and condemned the entire political class. A year later, he was named once again to the post by parliament amid a crippling economic crisis and months after the massive explosion that compounded the country's woes.

Aoun should be in asylum and Bassil in prison. Shame on Lebanese for letting these two premeditated criminals with their Faustian deal with HizbIran criminal organization still pushing Lebanon to Hell and beyond.

I am not a fan of either of the two. But the ignorance of the people amaze me.
Put the blame on these two and don't mention the others that have been in control for 30 years.
Nothing will change. the ignorance got the country where it is. Don't blame anyone but yourself.

Putting the blame only on Aoun and Bassil is the main reason why the 2019 movement failed. Kelloun ya3ne kelloun w Hariri wahad mennoun.

Hariri is not evil. He is incompetent but not evil.
I hope Aoun and Bassil get their load of sanctions from Europe.
Enough is enough!

He was not meant to be a politician.... but rather a lover.

The army must make a move and,take over until new elections can be organized, both parliamentary and presidential elections. It is the only solution.

Don’t make me laugh LLL. The LAF is completely corrupt, every single branch of it from foot soldier to general.

Good good. Let the Lebanese people keep waiting for a miracle instead of storming the palace and putting an end to this bs once and for all. At this point, I'm not really sure who's worse. The criminals in the govt or the morons waiting and watching.

thanks, Hariri !!A Cristhian the head of cabinet !!!

I always said the Maronites were and still are the cancer of this country, and now Aoun and Basil, who both are not Christians in deeds but on a piece of paper, have proven my point. As a devout Christian, I wouldn't shed a tear if all the Maronites are thrown in a shithall because they deserve it and because they worship the devil and not Jesus.

He should be tried in International court.