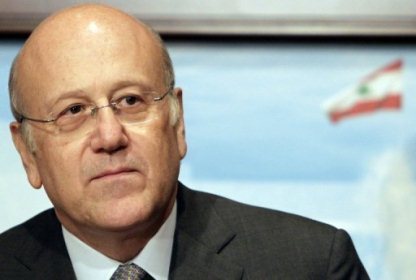 A “gloomy” and “cautious” atmosphere is engulfing the cabinet formation process after a “key obstacle” emerged, a media report said on Friday.

“The President has vetoed the confessional distribution that (PM-designate Najib) Miqati has suggested for the sovereign portfolios,” sources informed on the negotiations told the Nidaa al-Watan newspaper.

“Aoun specifically did not stomach the idea of allotting the interior and justice portfolios to the Sunni community,” the sources added.

“The President considered that there is a flaw in the sectarian balance of the cabinet line-up in terms of the distribution of portfolios according to type and importance,” the sources went on to say.

The sources also pointed out that “it will be difficult to move forward in the formation process unless this obstacle is resolved.”

“That’s why it was agreed to take a 72-hour timeframe in which the PM-designate would look into possible solutions,” the sources added.

So once again, despite the constitution stating that the President has only to be consulted concerning the formation of a new government, he has put in his veto.
He will never be satisfied until he gets exactly what he wants, that is a government completely formed by his Hizballah terrorist allies.

Actually Pippo, this government is a Hezbollah government lol . Miqati was their candidate PM! Aoun is simply trying to cover his ass by ensuring that any important minister won’t impede on his evil program.

Ahhhh... but your nassrallah is not a child killer?

Cursed be France for saving Aoun’s life and harboring him for 16 years at the expense of the French taxpayers ! He’s a sectarian cancer!

Our way or the highway. Hang yourself if you don’t like. Mukawama for life.

he needs the interior ministry in order to tamper with next elections results, the defense to control the security forces to suppress the popular protests that are going to take place when he’ll refuse to give up power, and the justice to provide immunity in getting rid of the dissidents and providing cover for his dictatorial regime

How about finding Atheists to take over these portfolios? There are many in Lebanon.

Second that, in fact let all ministers be Atheists couldn’t be worse than this stupid sectarian game.
Behooves them all to heed Vladimir Lenin’s admonition: “Religion is the opiate of the masses”
For once I agree with him.

According to the WHO this new Shia variant must be contained ASAP.

This old man is a disaster for Lebanon. Al Rahi should declare him an atheist, because he is through his actions, and hence he should abdicate the position of the president as he is not anymore a Christian. Then, another real Christian should be appointed who has humility and love, not like this man who has hate and Conceitment.

indeed he is a cake full of sleeze!

Everyone knows that this guy makes deals even with the devil. Accordingly, I am more than sure that he's preparing a deal with Aoun and Basil to steal what's left of Lebanon's riches. Engrossingly, though, this would happen soon with the help of the king of corruption Riad Salamah, who made billions misappropriating our monies at the banks. This big crook should be hanged.