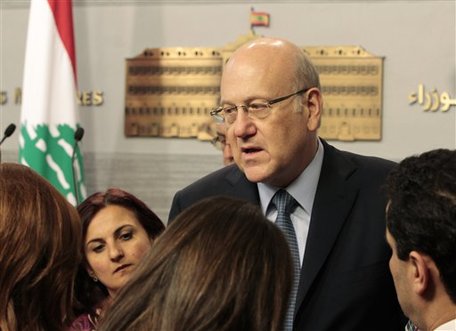 Optimism has surged on the possibility of forming a new government in the coming days while most Lebanese newspapers have published incomplete draft cabinet line-ups.

“Discussions are underway to pick candidates who would satisfy the Lebanese and the international community in order to be able to receive international aid,” the reports said.

Below is the draft line-up that is being circulated:

- Deputy PM: To be named by Aoun and Miqati

- Interior: Ibrahim Basbous or Mohammed al-Hassan or Marwan Zein or a candidate from the al-Hajjar family

Splitting the cake - they don't get it... they just don't get it.. your time is up. you will end up on a lamppost hung upside down

Clearly, it is a government of independent experts from the same ruling mafia. As to "From the President's Share": When the government fails to perform, it resigns along with the prime minister. What happens to the President who named half the ministers in the cabinet? Does he stay or go?

“a candidate from the al-Hajjar family” …a Ministry assignment is being dealt as a prerogative of a family… and who would be selected, are they gonna pick it with a lottery? is this some sort of joke???!!!

What culture is this? The culture of terror?

And why didn’t they merge culture and agriculture this time again to prove their incurie, carelessness and negligence?

With this syrianian government, we’re plucked for good.

$100 bet says that the Taliban form a government before us!!

Formation upgraded from a Vichy to a mafia-Vichy government... impressive progress worth waiting for!

If the energy ministry goes to Aoun, the country should be kissed goodbye. Miqati would be a puppet to Aoun and doing what Aoun wants, which means, oil and gas will again be subsidized to help Basil steal what's left of people's monies. A bunch of idiots sharing the country and splitting it amongst themselves. The problem, though, is that they all claim to defend their religious affiliation, while in essence, their actions come from the devil. What a joke.

Clearly this is a Berri Government. He put his hand on the Finance and Labor so that he can loot the country again a get re-elected. The most powerful man in Lebanon.
Shame on you Mikati. Just go back where you came from and leave this country alone. You are going to have a lot of blood on your hands.