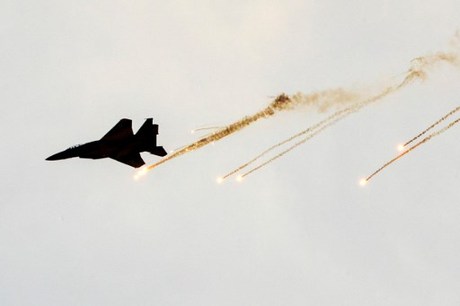 The Russian military, which provides air-defense systems to Syria, has said that Syria had shot down more than 20 missiles launched from Israeli F-15 fighter jets from Lebanon's airspace during the Thursday night raid.

Rear Adm. Vadim Kulit, head of the Russian military's Reconciliation Center in Syria, said Syrian air defense units downed 21 of the 24 guided missiles launched by the Israeli aircraft with Russia-supplied air defense systems. He didn't specify what Syrian facilities were targeted by Israeli jets and whether they inflicted any casualties or damage.

Syria's state news agency SANA had said that the missiles were launched from the area southeast of neighboring Lebanon and targeted areas near Damascus.

The Israeli military, which rarely speaks of its operations in the war-ravaged country, did not acknowledge that they carried out any airstrikes.

It said only that a surface-to-air missile launched from Syrian territory towards Israeli air space exploded over the Mediterranean Sea on Friday, and that residents in central Israel had located several missile fragments on the ground.

Israel has launched hundreds of strikes against Iran-linked military targets in Syria over the years. but rarely acknowledges or discusses such operations.

Israel views Iranian entrenchment on its northern frontier as a red line, and it has repeatedly struck what it says are Iran-linked facilities and weapons convoys destined for Lebanese Hizbullah. The Iran-backed militant group is fighting alongside Syrian government forces in the country's long-running civil war.

Russia has waged a military campaign in Syria since 2015, helping President Bashar Assad's government reclaim control over most of the country after a devastating civil war. Moscow also has helped modernize Syria's military, including providing Assad with air defense systems, and trained its personnel.

This is the least of our concerns right now.