Lebanese Doubtful New Cabinet Up to the Task of Reform 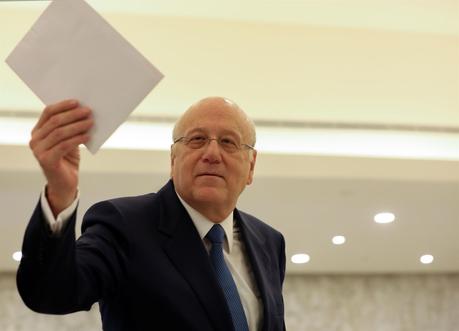 Lebanese commentators have voiced skepticism over the bankrupt state's ability to win back the support of foreign donors after political factions finally agreed a new government following 13 months of horse-trading.

Billionaire Najib Miqati, who has served as prime minister twice before, on Friday unveiled his team of newcomers, some technocrats but all endorsed by at least one of the political parties dominant since the 1975-1990 civil war.

The 24-member cabinet, which includes only one woman, faces the daunting mission of carrying out reforms demanded by the international community to unlock desperately needed financial aid.

But many Lebanese questioned whether the new team was up to the task, or would be able to bring forward the demands of a 2019 protest movement for an end to alleged mismanagement and corruption.

"There is no confidence in Najib Miqati's government, which represents the interests of a system that engineered the country's collapse," wrote the al-Akbar newspaper, which is close to Hizbullah.

The new government comes as Lebanon is mired in what the World Bank has described as one of the world's worst economic crises since the 1850s.

The overwhelming majority of Lebanese struggle to survive amid soaring inflation, fuel and medicine shortages, and almost round-the-clock power cuts.

A huge swathe of the population has sunken into poverty, while thousands of the better off have left the country for new lives abroad.

Decision-making in Lebanon has long been complicated by a complex power-sharing system that seeks to maintain balance between the country's various religious communities.

Miqati was the third person asked to try to form a new government after the previous one resigned following a massive explosion of ammonium nitrate fertilizer at Beirut port last summer that killed at least 214 people.

It emerged afterwards that officials had known the highly explosive material had been lingering unsafely on the dockside for years, but had done nothing about it.

Activists on social media have slammed the new cabinet as representing the same people they hold responsible for the blast.

One user described it as yet another product of "the nitrate regime, political sterility and corruption."

The United States and the European Union have both urged the new government to undertake reforms quickly.

But Lebanese political analyst Sami Nader said he feared a continuation of the same "quota politics and bickering over every reform" that had dogged the previous cabinet.

"But overall as a government it's not equipped to deal with the broader long-term challenges because there is no political consensus on how to get the country out of the mess it's in," she said.

In an emotional speech on Friday, Miqati vowed to leave no stone unturned in his quest to save the small country.

But many see the business tycoon, who is reputed to be Lebanon's wealthiest man, as a product of a corrupt oligarchy. He was accused by a state prosecutor in 2019 of illicit enrichment, a charge he denies.

Among the new cabinet members is incoming health minister Firass Abiad, the head of Lebanon's largest public hospital, who rose to prominence for his role in tackling the Covid-19 pandemic.

Academic Nasser Yassine is to lead the environment ministry.

Youssef Khalil, a veteran of the central bank, is to become the new finance minister and relaunch stalled talks with the International Monetary Fund to rescue the economy.

But some critics have said he is unlikely to take a tough stance against his former employer, whom many accuse of being behind the current financial meltdown.

As for the lack of women in the line-up, Yahya said it was "mind-boggling" but not surprising.

"It's a symptom of the way the political calculus continues to happen, the way these people think about politics, about governance," she said.

A worst Vichy government than the preceding ones. All marionette of HizbIran and the Revolutionary guards. This time complimented of Assad appointees. Aoun & Miquati have sold us out.

Lebanon's Christians, whom the World Bank estimates amount to as many as two dozen individuals, have called on the new government to respect the precise terms of the Taef Accord, the unwritten document by which Christians agreed to give up their 6:5 numerical advantage in the Chamber of Deputies in favor of the present 50:50 split in the distribution of seats regardless of electoral outcomes.

Let's be accurate and correct when we criticize others or something, otherwise we devalue our own opinion, and lose the moral high ground. The ratio was never 6:5. It was 5.5:4.5. Thanks