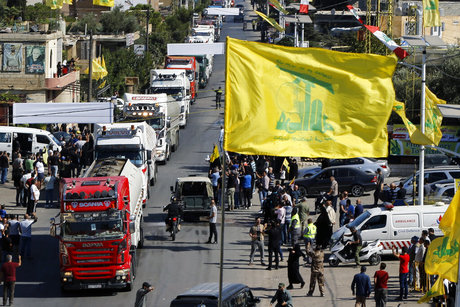 A convoy of tanker trucks carrying Iranian diesel crossed the border from Syria into Lebanon early Thursday, a delivery organized by Iran-backed Hizbullah to ease crippling fuel shortages in the crisis-hit country.

The trucks entered from Syria through an illegal crossing in the eastern region of Hermel.

The delivery violates U.S. sanctions imposed on Tehran after former President Donald Trump pulled America out of a nuclear deal between Iran and world powers three years ago.

It was portrayed as a victory by Hizbullah, which stepped in to supply the fuel from its patron, Iran, while the cash-strapped government grappled with the fuel shortages for months.

The first Iranian oil tanker arrived in the Syrian port of Baniyas on Sunday and the diesel was unloaded to Syrian storage places and later brought overland to Lebanon. Hizbullah leader Sayyed Hassan Nasrallah said in a televised speech earlier this week that the tanker did not offload its cargo directly in Lebanon to avoid embarrassing Lebanese authorities and risking sanctions on Lebanon.

Hizbullah, which is often accused by its opponents of operating a state-within-a-state and has been taking part in Syria's civil war alongside government forces, has its own crossing points along the Lebanon-Syria border away from formal border crossings.

There was no immediate comment from Lebanese or U.S. officials on the Iranian fuel delivery Thursday.

"Don't forget this day," tweeted Laury Haytayan, a Lebanese oil and gas expert and activist, describing it as the day Hizbullah won over the Lebanese state.

Hizbullah's al-Manar TV called it "the tanker truck convoys to break the American siege" adding that 20 tanker trucks each carrying 50,000 liters (13,210 gallons) crossed the border Thursday and were on their way to the eastern Lebanese city of Baalbek where Hizbullah will start distributing the fuel.

"This is humanitarian aid that will meet the needs of the population," said Jawad, a 50-year-old Hermel resident who was among the crowd gathered to welcome the convoy.

Hizbullah "is not replacing the state, it's a temporary measure until the state can deliver its duties," he said.

"This is a very big and great thing for us because we broke the siege of America and foreign countries. ... We are working with the help of God and our great mother Iran," said Nabiha Idriss, a Hizbullah supporter who gathered with others to greet the tankers' convoy as it passed through the eastern town of al-Ain.

Lebanon is in the grips of a devastating economic crisis. Severe shortages in fuel have paralyzed the country, resulting in crippling power cuts that have disrupted the work of hospitals and bakeries. Just to get gasoline, people must wait hours in line, commonly called, "queues of humiliation."

The tanker trucks crossed from Syria's central province of Homs into Lebanon's Bekaa Valley and were welcomed by residents who gathered on the sides of the main road. Hizbullah's yellow flags and banners praising the Iran-backed group and Syria's President Bashar Assad decorated the streets.

The arrival of the Iranian diesel comes nearly a week after a new government was formed ending a 13-month deadlock. Lebanon's new Prime Minister Najib Miqati has not commented on the deal to import fuel from Iran.

Nasrallah said earlier this week that the diesel will be donated for a period of one month to institutions including public hospitals, nursing homes, orphanages, water stations and the Lebanese Red Cross. Nasrallah added that others who will get fuel at low prices are private hospitals, medicine and serum factories, bakeries and cooperatives that sell food products.

Nasrallah said three other tankers carrying diesel and one carrying gasoline will arrive in the coming weeks.

Where is America and Saudi Arabia? They enjoy to see Lebanon suffer only.

Annahar will delete this comment. Because this is a pro saudi platform.

Excellent comment as usual. Your patriotism to Iran and Syria is to be commended. You add value... Thank you.

Mystic, I believe you forgot to thank America. But of course, you will ignore this comment, because you are a Iranian fanatic.
https://www.usaid.gov/news-information/press-releases/aug-5-2021-united-states-provides-nearly-100-million-humanitarian-lebanon

This doesn’t compensate for the smuggling of our fuel and medicine done by your kind from Lebanon to Syria .

Hezbollah playing the arson/firefighter game to perfection. Even so, I doubt that the Lebanese will be falling for it.

the tankers entered from Syria through an illegal border crossing... courageous and transparent operation! anyway, everything was devised on purpose: Assad got the fuel he needed despite the sanctions, the Iranian ship load was kept in Syria for the regime benefit, the tankers transported into Lebanon contain Syrian low quality poorly refined fuel... Hzb does not care, they're not paying for it all the same and they have access to their own fuel hoarded and stocked during last months... Lebanese people will get the scraps as usual

well, at least they are helping the people of Lebanon. This fuel is badly needed and appreciated by the Lebanese people, one and all.

Comparison to North Korea is spot on. The fuel we are getting you lunatics is the fuel that was stolen and stored from the states subsidy plan. The fuel just happened to show up in Lebanon, The crossing from Syria is just a story that cannot be verified.

Mr PM Mikati, how can you blame them for bringing fuel without government consent while there was no government at the time of the deal? the only person that you can blame is your president. micheal oun