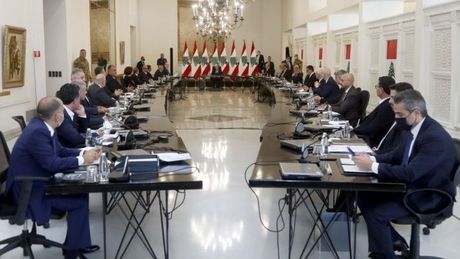 The new Cabinet will hold its second session on Thursday to discuss a near-final version of the new government’s policy statement, media reports said.

“The ministerial committee tasked with drafting the statement adjourned its third session yesterday at the request of Prime Minister Najib Miqati, after postponing the decision on only four points to today’s Cabinet session,” a member of the committee told al-Joumhouria newspaper in remarks published Thursday.

Other sources meanwhile said that the points of contention include the electricity plan, specifically the part related to the new power plants and gasification stations, after a dispute renewed over whether or not to construct a plant in Salaata.

There are also disagreements over “the economic revival plans, including the plan to rectify the banking sector and unify the losses’ numbers ahead of reviving the negotiations with the International Monetary Fund with a unified plan and numbers,” the newspaper said.

disagreement and contentions over the most important and pressing issues...... the epitome of a salvation a government!!