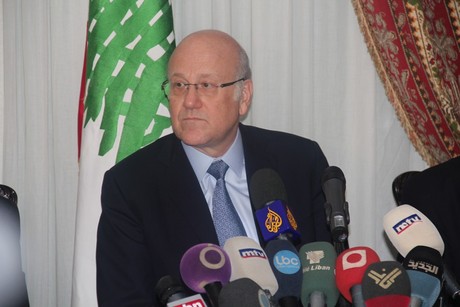 "Through his meeting with the French president, Miqati aims to activate the resolutions of the CEDRE Conference, which can enable Lebanon to obtain three to four billion dollars, in light of a promise from Macron to enable Lebanon to achieve that," al-Joumhouria newspaper reported on Wednesday.

"Through this step, Miqati also wants to meet the expected negotiations between Lebanon and the International Monetary Fund, which reports had previously said that it would grant Lebanon loans worth several billion dollars to carry out some vital and developmental infrastructure projects in the event of an agreement with Lebanese authorities on implementing the reforms decided at the CEDRE Conference and through the French initiative," the daily added.

Macron meanwhile wants to give the priority to French companies in any plans to rebuild Beirut's port and the electricity sector, especially that a few months separate us from the French presidential elections, the newspaper quoted informed sources as saying.

"He needs a political-investmental achievement in Lebanon that contributes to boosting his position in the presidential race," the sources added.

Macron thinks about jobs for the french, about french to securing contracts.

Our politicians think how can I look good by distributing handouts. Never have I heard a lebanese politician discussing jobs...

If they or anyone wants to help it should be without conditions other than elimination of corruption.