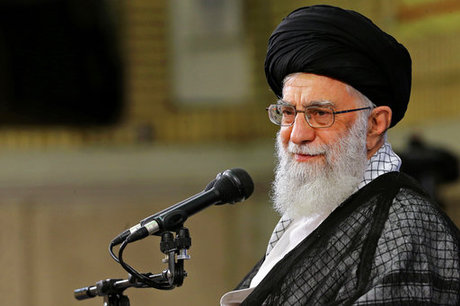 The United Arab Emirates, Bahrain, Sudan and Morocco all said in 2020 they would normalize ties with Israel, as Washington under the administration of then U.S. president Donald Trump made Arab-Israeli rapprochement a foreign policy priority.

"Some governments have unfortunately made errors -- have made big errors and have sinned in normalizing (their relations) with the usurping and oppressive Zionist regime," Khamenei said, referring to Israel.

"It is an act against Islamic unity, they must return from this path and make up for this big mistake," Khamenei added, in a speech marking a public holiday honoring the birth of the Prophet Mohammed.

Iran has in the four decades since the 1979 Islamic revolution positioned itself as a strong defender of the Palestinian cause.

Egypt and Jordan were until last year the only two Arab countries to normalize relations with Israel.

"If the unity of Muslims is achieved, the Palestinian question would definitely be resolved in the best fashion," Khamenei said.

In May, Khamenei characterized Israel as a "terrorist base" and "not a country."

There is not a vertical man who can rightly judge the living except according to man made laws. Man made laws do not judge sin; ...

And this old backward fanatic beholds the truth?
The truth is that he and his regime from the middle ages are more and more isolated. That other countries move forward, and that they stay behind...

fake peace with leaders not people approved, Israeli civilians hide their identity when they visits these countries

Hundreds of thousands of Israelis visit Turkey every year and the merchants in the markets there even speak to them in Hebrew, so what you are saying is, as usual, a load of rubbish.

Let us remember that Criminal Khamenei, uniformly despised by Iranian communities throughout the world that see him as the Great Satan and Evil Inquisitor, has had his basij kill thousands of educated Iranian during the Green Revolution. His regime can only survive by creating an external threat so his basij can brutally suppress any domestic opposition by claiming they are foreign agents... not dissimilar from criminal HizbIran actions in Lebanon. The world is changing and free people are becoming immune to oppression. These criminal days are counted!

God bless every nation looking for peace with its neighbor.

May god return Iran to its real shah former owners.