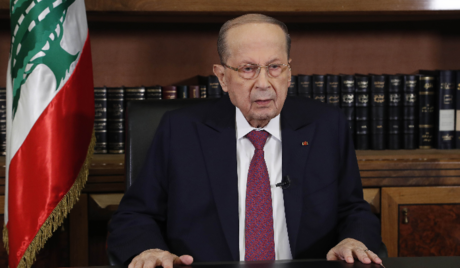 President Michel Aoun on Monday criticized Hizbullah and the Amal Movement without naming them as he called for “urgent” national dialogue over key matters.

“I tried to prevent the collapse and I called for several meetings and conferences, proposing solutions, but the system’s parties refused to give up any gains, without the taking the people into consideration,” Aoun said, in an address to the nation.

“The solution first requires accountability, which means identifying those responsible for the collapse, as well as protecting people's money and returning it to depositors. It also requires transiting to a civil state and a new system based on broad administrative and financial decentralization. The coming elections must be a referendum on this,” the President added.

As for the controversial issue of Hizbullah’s arsenal of weapons, Aoun said “it is true that defending the country requires cooperation between the army, people and resistance,” but stressed that “the main responsibility belongs to the state.”

“Only the state devises a defense strategy and oversees its implementation,” he added.

He also urged an end to “the premeditated, systematic and unjustified obstruction that leads to the disintegration of institutions and the dissolution of the state.”

“It is necessary for the government to convene as soon as possible to address the problems around Cabinet’s table. Under which law, logic or constitution is Cabinet being paralyzed?” Aoun asked, lamenting that Cabinet is being asked to “take a decision that does not fall under its jurisdiction” and that it is being paralyzed due to “an issue that does not represent a dispute that has to do with the National Pact.”

He added: “I do not want to antagonize anyone, neither individuals nor groups, and I don’t want to undermine the unity of any sect, but we must be frank: procrastination is lethal and I will not accept to be a witness to the fall of the state.”

“From my position as someone entrusted with the constitution, I call for urgent national dialogue to agree on three issues, and later work to approve them in institutions,” the President went on to say.

He said the three issues are “broad administrative and financial decentralization, a defense strategy to protect Lebanon, and a financial and economic recovery plan that would include the necessary reforms and a fair distribution of losses.”

In an apparent jab at Hizbullah, Aoun added: “I want the best relations with Arab countries, specifically with the Gulf states, and I ask: what is the justification for straining the ties with these countries and interfering in affairs that do not concern us?”

Let’s see what this “explosive TV speech” is all about. I can sense it’s going to be a pétard mouillé.

And so it was TP!

His speech wasn’t worth the required electricity to broadcast it.

lol @ 'without Naming It'

The « strong » President.. Pfff…
Worse than Bouteflika. He can barely read.
Despicable…

Right Patriot. A completely deflated Buffoon. When Lebanon with Cedar Revolution for the first time after Arab Wars, Palestinian militias, and Syrian occupation had a chance to be a sovereign, independent, democratic, educated and prosperous nation here comes Aoun, a mentally imbalanced demagogue to offer Lebanon to the criminal HizbIran militia for personal benefit. Aoun and Bassil are premeditated assassins of a country with tremendous potential. They are co-responsible with the Basij for Lebanon's ills and political murders. They sold Lebanon for 30 pieces of silver. They and Hizbollah criminals should all rot in prison if there is a grain of justice left. We'll make sure this happens!

Sitting here in my EasyChair watching this enjoying another refreshing Lemon doubly.

Aoun: I call for national dialogue to agree on decentralization, a defense strategy...
What BS nonsense, he promised to do this as soon as he was elected over 5 years go. But by then he was too busy preparing for his son in law's succession and didn't want to piss off the Hezb.

Yawn....Nothing explosive so far. Seems like Bassil and Safa was able to defuse it yesterday.

Was expecting a bark, heard a whimper.

"It also requires transiting to a civil state . . . lamenting that Cabinet is being asked to “take a decision that does not fall under its jurisdiction” and that it is being paralyzed due to “an issue that does not represent a dispute that has to do with the National Pact.”\
"National Pact" refers to the previous power-sharing where "Christians got six seats in Parliament for every five held by "non-Christians". That gave way to the current fifty-fifty split per Article 24 of the Constitution. It sounds like Aoun is done with "Christian" set-asides in Parliament.

you are an expert at plagiarism