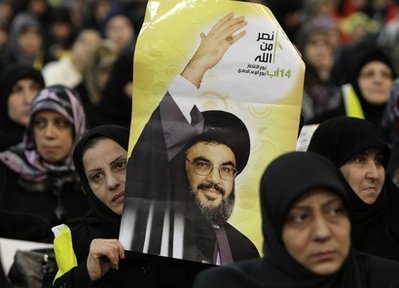 Hizbullah will not respond to the Kuwaiti paper’s demands, sources have said.

Informed sources told al-Liwaa newspaper, in remarks published Tuesday, that the paper carried by the Kuwaiti foreign minister is addressing the Lebanese state and not Hizbullah, even though some points are directly related to the group.

“The state will respond, as promised by Foreign Minister Abdallah Bou Habib,” the sources said.

They added that Hizbullah would commit to the requested “verbal pacification” towards KSA and some Gulf states, if the latter stopped "attacking" and accusing the Shiite party.

Bou Habib had said Monday that studying the Kuwaiti paper will be done by Saturday.

President Michel Aoun reportedly expressed to the Kuwaiti envoy his reservations over the mention of U.N. Security Council Resolution 1559 in the submitted paper, stressing that “the issue of Hizbullah’s arms and its regional role is not a local issue that has to do with Lebanon alone, but rather a regional and international issue.”

And STILL, Aoun cannot see the starting gate at the path forward to returned prosperity ...

Origin and meaning of abstain

late 14c., "avoid (something); refrain (oneself) from; keep free from sin or vice; live austerely, practice abstinence or asceticism; be sexually continent," from Old French abstiner, abstenir (14c.), earlier astenir (13c.) "hold (oneself) back, refrain voluntarily, abstain (from what satisfies the passions), practice abstinence," from Latin abstinere/abstenere "withhold, keep back, keep off," from assimilated form of ab "off, away from" (see ab-) + tenere "to hold," from PIE root *ten- "to stretch." Specifically of liquor from late 14c. Meaning "refrain from voting" is from 1796.

As long as Hezbullah refuses to come out for majority rule, it is suspect. Article 24 of the Lebanese Constitution reserves half of the national legislature to Christians who are about a quarter of the population although a census has not been done since 1934. This fifty-split is called the Taef Accord, which the Kuwaiti paper says is a key principle of Lebanese governance.