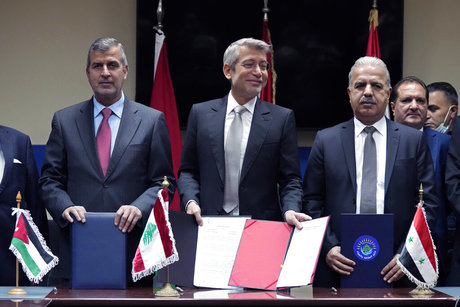 The energy ministers of Lebanon, Jordan and Syria signed Wednesday an agreement in Beirut for supplying Lebanon with Jordanian electricity via Syria.

A power cut at the Ministry of Energy caused a short delay before the agreements of purchase and transit were signed.

Lebanon will secure through the agreement 250 megawatts of electricity, equivalent to a total of two additional hours of power daily, Energy Minister Walid Fayyad said.

He described the deal as a "modest but very important agreement for the Lebanese people, who need every extra hour of electricity."

Fayyad praised what he described as speedy Arab cooperation that has enabled the transmission of electricity in two rather than six months.

Parliament must now ratify the agreement, which was funded by the World Bank, Fayad said, adding that he expects payments to be finalized within two months before the start of implementation.

Power sector reform is one of the key conditions set by international creditors for disbursing billions of dollars in desperately needed financial support.

Importing electricity from Jordan will cost Lebanon about $200 million per year, Fayad told AFP in an interview last week.

Jordanian Energy Minister Saleh Kharabsheh said the agreement with Lebanon reinforces cooperation between the neighboring countries and comes at a “critical time for Lebanon.” He called it a deal to help Lebanon, and not a “commercial deal” — suggesting it is only covering its cost.

“This is not only to the benefit of Lebanon but in the interest of all. Any cooperation between Arab countries is an interest for all,” Kharabsheh said.

The government is also in talks with Egypt to import gas through the Arab Gas Pipeline, which passes through Jordan, Syria and Lebanon.

Beirut and Cairo are currently finalizing commercial agreements so that the two sides can sign a deal by spring.

Lebanon and Jordan also signed an electricity transit agreement with Syria, which said that it stands ready to connect its power grid.

Speaking in Beirut after the signing ceremony, Syria's Energy Minister Ghassan al-Zamil said the U.S. sanctions, known as the Caesar act, are of no concern to his government.

Despite sanctions on Syria, Washington has endorsed different deals to help Lebanon handle its energy crisis. It has offered reassurances to Lebanon and waivers from sanctions to companies sending gas and electricity through Syria. But there has been some push back from Congress against offering what seems to be a relief for the government of Syrian President Bashar Assad.

“Caesar is imposed by a country. It is not a law,” Zamil told reporters. “What concerns us in this deal, despite the Syrian government putting up with a lot of expenses to fix the pipelines which were not a priority for the government or the electricity ministry, is the insistence of the government to offer more to support Arab cooperation.”

Syria's government has been largely boycotted by its Arab neighbors since the start of the war in 2011. Most countries blamed Assad's government for the war's atrocities. But as the war dies down and Assad remains in power, many Arab neighbors have began reconsidering their ties with Damascus, re-opening their embassies and exchanging visits.