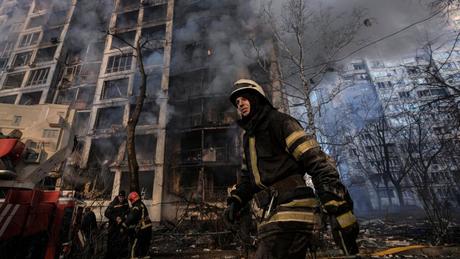 Three people were killed and 12 others wounded in the early hours of Thursday in a Russian strike on a school in Ukraine's northern Chernigiv region, the emergency services said.

"We have three people killed and 12 wounded as a result of a strike" in Novgorod-Siversky, a spokesman told AFP.

The town is in the north-eastern corner of the country, around 45 kilometers (30 miles) south of the Russian border.

The services later said the strike hit a "school and a boarding school" in a statement on social media.

It said the strike came just after midnight, and that a fire broke out in the school "as a result of shelling."

It posted a video of a badly destroyed building that seemed to only have its outside walls still standing.

A destroyed playground was also visible in the footage, as well as remnants of Ukrainian flags hanging from shattered windows.

Rows of destroyed cars and trucks were visible in the field outside the school.

The Chernigiv governor Vyacheslav Chaus said earlier in a Telegram post that there were "dead and wounded" in the strike, but did not give numbers.

He said rescuers and medics were "working at the scene".

Aside from the school, he said "administrative buildings and private houses were also damaged."

Earlier the Ukrainian army said Russia had "carried out artillery shelling" on the Chernigiv region.

Novgorod-Siversky had a population of around 15,000 before the war.

Heavily targeted at the start of Russia's invasion of Ukraine, the Chernigiv region has in recent weeks seen fewer attacks than other eastern regions.