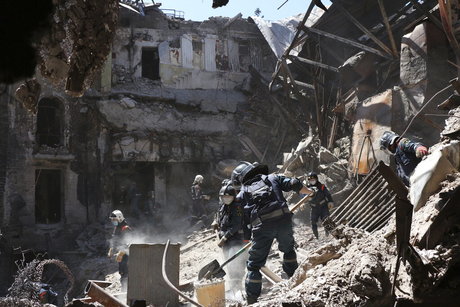 Here are the latest developments in the war in Ukraine:

The United States accuses Russia of forcibly taking onto territory under its control tens of thousands of Ukrainians, sending them to "filtration camps" where they are subjected to "brutal interrogations".

The remarks by Michael Carpenter, the US ambassador to the Organization for Security and Co-operation in Europe (OSCE), support allegations by the Ukrainian government which estimates nearly 1.2 million people have been deported into Russia or Russian-controlled territory.

Ukrainian prosecutors are investigating a series of war crimes allegedly committed by Russian forces, including the fatal shooting of two unarmed civilians outside Kyiv, CNN reports.

CNN and the BBC release security camera footage showing two Ukrainian civilians shot in the back by Russian soldiers near a car dealership outside of Kyiv on March 16.

One man died on the spot, the other died shortly after. Prosecutors are investigating the attack as a war crime, CNN reports.

A total of 6,029,705 people had fled Ukraine as of May 11, with Poland hosting the largest number. Women and children represent 90 percent of the refugees.

France says the Group of Seven industrialized nations is committed to helping Ukraine win its war against Russia as the group's top diplomats hold talks in northern Germany.

French Foreign Minister Jean-Yves Le Drian says the G7 countries were "very strongly united" in their will to "continue in the long term to support Ukraine's fight for its sovereignty until Ukraine's victory".

Ukraine's presidency says shelling continues throughout Lugansk -- part of the Donbas region where its forces are fiercely opposing Russian troops and Kremlin-backed separatists.

Russia's army said it struck Donetsk and Kharkiv on Thursday, killing more than 170 people and destroying Ukrainian drones and rockets.

Authorities in Moldova's Moscow-backed breakaway region of Transnistria say two attempted attacks were carried out on infrastructure in the regional capital Tiraspol.

The incidents come after a string of attacks were reported in the separatist region with fears mounting of a spillover from the conflict in neighboring Ukraine.

A special committee will announce Finland's formal decision of whether to join NATO on Sunday after the country's president and prime minister say they want their country to join the alliance in the wake of Russia's invasion of Ukraine.

NATO chief Jens Stoltenberg promises the membership process -- which the US Senate, Germany and France also say they back -- will be "smooth and swift".

But Russia, which has been infuriated by NATO's expansion into eastern Europe, says it will be forced to take "military-technical" steps if Helsinki presses ahead with its NATO bid.