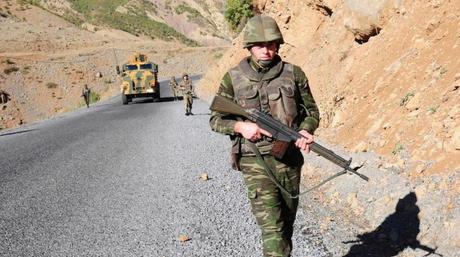 A Turkish soldier was killed Thursday during a military operation against Kurdish militants in the north of Iraq, Turkey's defense ministry said.

That brings the number of Turkish soldiers killed in the region to six since Tuesday.

Turkey's official news agency Anadolu said the Turkish soldiers had clashed with fighters from the Kurdistan Workers' Party (PKK), which Ankara and its Western allies say is a terrorist organization.

The PKK has training camps and bases in autonomous Iraqi Kurdistan and has been waging an insurgency against the Turkish state since 1984, a conflict that has killed 40,000 people, many of them civilians.

Ankara has launched a series of operations against PKK fighters in Iraq and Syria, the latest one in northern Iraq beginning in April.

Turkish President Recep Tayyip Erdogan said on Monday that Turkey would soon launch a new military operation into northern Syria which he said was designed to create a 30-kilometre (19-mile) "security zone" along their border.