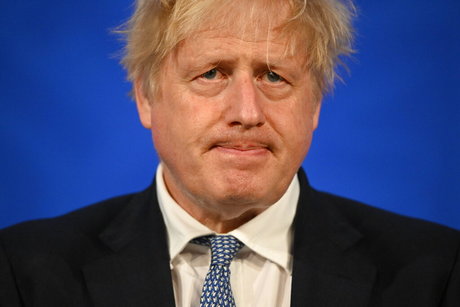 But the Tory leader is refusing to quit, arguing that while he "bitterly" regretted the rule-breaking and ensuing police fines, he did not realize his own government's Covid regulations were being breached and that it was time to move on.

In a series of lurid revelations made in her report, Gray said Downing Street cleaners had to mop up spilt red wine. At least one reveler vomited, and two came to alcohol-fuelled blows.

The cleaners and security guards suffered "multiple examples of a lack of respect and poor treatment" from partying civil servants, Gray found.

At his daily press briefing, Johnson's official spokesman was forced to apologize himself after repeatedly insisting that no rules were broken at a time when Britain was in Covid lockdowns over the past two years.

"He apologized to a number of staff yesterday. He spoke to more this morning. He was appalled by that behavior," the spokesman said with regard to the security and cleaning staff.

Downing Street rules have already been changed to forbid in-office drinking except for social functions with outside guests, he said.

"I don't think we have the fridge anymore," the spokesman added, referring to a notorious wine cooler that was installed to facilitate the past partying.

But outside an election, Conservative MPs are the only people able to force Johnson from office.

He met late Wednesday with Tory backbenchers, reportedly arguing that heavy-drinking predecessor Winston Churchill would not have been able to win World War II if Downing Street had imposed a total booze ban at the time.

A total of 19 Tory MPs have publicly called for Johnson's resignation, but others are believed to be holding back due to the war in Ukraine. Fifty-four letters of no-confidence are needed to trigger a leadership ballot.

John Baron, one of the three MPs who came forward after the report's publication, accused Johnson of misleading parliament and said he "no longer enjoys my support."

The prime minister still faces a House of Commons inquiry into whether he deliberately misled MPs with his repeated denials of rule-breaking.

"The strong intent is to cooperate fully" with that inquiry, Johnson's spokesman said.