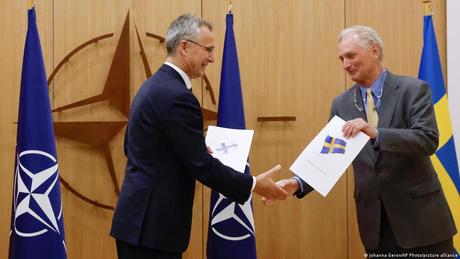 Romania and Poland hope Sweden and Finland will be able to join NATO despite Turkey's reluctance, the country's foreign ministers said Friday during a visit to Ankara.

But Turkey, a NATO member, is throwing a spanner in the works as any membership must be unanimously approved by all members of the military alliance.

"Unlike many, I am optimistic... I am convinced that this disagreement will be resolved in the best way, in the spirit of NATO solidarity," Polish Foreign Minister Zbigniew Rau said at a joint press conference with his Romanian and Turkish counterparts.

"Sweden and Finland becoming members of NATO is vital to making us stronger," he said, though adding that their joining "should however benefit all NATO allies, including Turkey."

"We hope to soon have good news concerning Sweden and Finland," he said.

Ankara accuses Stockholm in particular of providing a haven for the outlawed Kurdistan Workers' Party (PKK), listed as a "terrorist" group by Turkey and its Western allies.

It also accuses Sweden of harboring supporters of Fethullah Gulen, the U.S.-based preacher wanted over a failed 2016 coup in Turkey.

Turkey's Foreign Minister Mevlut Cavusoglu said his country had made "legitimate" demands of Sweden and Finland.

"These countries back terrorism. They must end this support and lift restrictions on defense industry sales to our country" imposed after the Turkish army's Syria operation in 2019, he said.