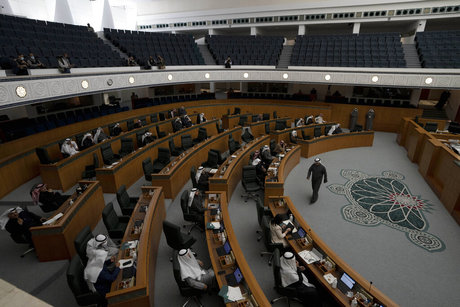 Kuwait's crown prince on Wednesday dissolved Parliament and called for early elections, a move to ease government gridlock that has bred popular opposition and paralyzed the tiny country for months.

In his televised national address, the 81-year-old Sheikh Meshal Al Ahmed Al Jaber said that while the ruling family respected Kuwait's constitution that grants the country's rowdy parliament more power than elsewhere in the autocratic region of Persian Gulf sheikhdoms, popular dissatisfaction over the deepening dysfunction compelled the emir to intervene.

"Our goal with this constitutional solution is the firm and sincere desire for the people themselves to have the final say in the process of correcting the political course anew by choosing who represents the right choice," said Sheikh Meshal, who assumed most of the emir's responsibilities last year.

A date for legislative elections was not immediately announced.

The country's Cabinet resigned over two months ago over disputes with Parliament, resulting in a prolonged paralysis. Over a dozen Kuwaiti lawmakers began a sit-in last week inside the parliamentary chamber to press for a new government and voice their opposition to the worsening political crisis that has blocked economic and social progress in the country.

The wrangling has left many Kuwaitis deeply disenchanted with their 50-member elected legislature. Parliament is empowered to pass and block laws, question ministers and submit no-confidence votes against senior officials. However, final authority rests with the ruling emir.

Kuwait's emir, Sheikh Nawaf Al Ahmad Al Sabah, appeared briefly on state TV on Wednesday to say he authorized his heir to give the national address, effectively blessing the step.