G7 vows to drive up costs for Russia over Ukraine war 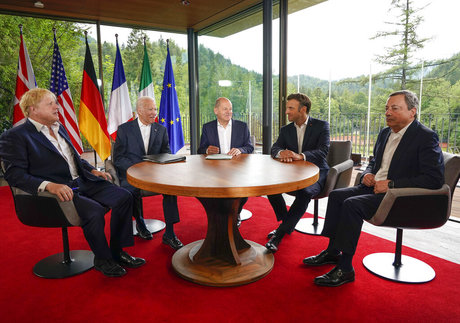 The world's top industrialized powers vowed to make Russia pay for its invasion of Ukraine, German Chancellor Olaf Scholz said Tuesday, stressing that "Putin must not be allowed to win."

"The G7 stands united in its support for Ukraine," Scholz told a press conference after a summit of G7 leaders.

"We will continue to keep up and drive up the economic and political costs of this war for President (Vladimir) Putin and his regime."

Over the three days of their summit, the G7 had announced several new measures to put the squeeze on Putin, including a plan to work towards a price cap for Russian oil.

The group also agreed to impose an import ban on Russian gold, a move that will further choke off Moscow's revenues.

"What people basically agreed on… was to give the Ukrainians the strategic endurance they need to try to shift the dial, to try to change the dynamic of the position. That's what needs to happen," said British Prime Minister Boris Johnson.