Trial of US basketball star Griner opens in Russia 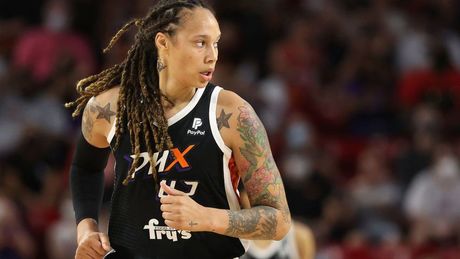 The trial of U.S. basketball star Brittney Griner, detained in Russia since February, opened on Friday as tensions rage over Moscow's offensive in Ukraine.

"The trial has started," Polina Vdovtsova, the spokeswoman for the court in the town of Khimki outside Moscow, told reporters.

Griner, a two-time Olympic gold medalist and WNBA champion, faces up to 10 years in prison on charges of drug smuggling.

The trial was partially closed, with a limited media presence, which Vdovtsova said was "on the request of the defense, the request of Griner herself."

The six-foot-nine inch (2.06 meters) star was brought into court in handcuffs. She wore a white T-shirt with U.S. music icon Jimi Hendrix on it.

The 31-year-old came to Russia in February to play there during the U.S. off-season, and was detained at a Moscow airport after she was found carrying vape cartridges with cannabis oil in her luggage.

U.S. authorities initially kept a low profile on the case, which was not made known to the general public until March 5.

But against the backdrop of sinking relations, Washington now says that Russia "wrongfully detained" the basketball star and put its special envoy in charge of hostages on the case.

"The U.S. embassy and the country cares very deeply about this case," Elisabeth Rood, deputy chief to the U.S. embassy in Moscow, told reporters outside the court.

"She asked me to convey that she is in good spirits and she is keeping up faith."

Griner's lawyer Alexander Boikov said she had "no complaints about the conditions of her detention."

He added that she is practicing sport "in her cell and on walks."

The WNBA has also said it is working to bring Griner home.

She was due to play club basketball in Russia before the resumption of the U.S. season, a common practice for American stars seeking additional income.

The next hearing will take place on July 7.

Russian law is strict in such cases and other foreigners have recently been handed heavy sentences on drug-related charges.

Russia and the United States regularly clash over the detention of each other's citizens and sometimes exchange them in scenes reminiscent of the Cold War.

In April, former U.S. Marine Trevor Reed, serving a nine-year sentence in Russia for violence, was exchanged for Russian pilot Konstantin Yaroshenko, imprisoned in the U.S. since 2010 for drug trafficking.

Other exchanges of this type could be the subject of possible talks, observers say.

Among the names most mentioned is that of Paul Whelan, an American sentenced to 16 years in prison for espionage, and the Russian arms trafficker Viktor Bout, nicknamed "The Merchant of Death", who is serving a 25-year sentence in the U.S.

In January 2020, Putin pardoned a young Israeli-American woman, Naama Issachar, imprisoned in Russia for "drug trafficking" after then-Israeli leader Benjamin Netanyahu met with him in Moscow, and brought her home.

She was stopped in April 2019 during a transit at Moscow's Sheremetyevo airport while flying between India and Israel via the Russian capital.

Authorities said they found nine grams of cannabis in her luggage.